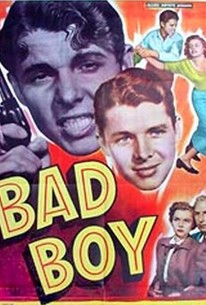 In 1947, Variety Clubs International, a showbiz charitable organization, was responsible for the frothy musical Variety Girl. The organization's 1949 film effort, Monogram's Bad Boy, is a bit on the grimmer side, but not too much so. Most of the film was lensed at the VCI's Boys Club Ranch at Copperas Cove TX. In his first starring role (and second film appearance), war hero Audie Murphy plays Danny Lester, the "bad boy" of the title. A delinquent with a long rap sheet, Danny is sent to the Ranch in hopes that he can be rehabilitated. This seems to be a hopeless goal until ranch head Marshall Brown (Lloyd Nolan) digs into Danny's past to find a reason for the boy's ungovernable behavior. Jane Wyatt as Brown's wife, James Gleason as his assistant, and a coterie of talented juvenile actors lend sensitivity and credibility to this refreshingly unsentimental yarn.

Only worth seeing for Audie Murphy completists.

There are no featured reviews for Bad Boy at this time.