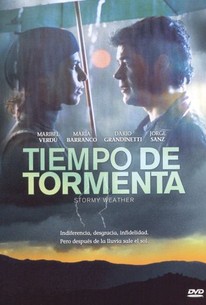 When the paths of two couples attempting to salvage what's left of their failing relationships cross, the effects of the fateful meeting reverberates throughout the rest of their lives in director Pedro Olea's affecting and humanistic relationship drama. The scene is a popular restaurant, and as Elena (Maribel Verdú) and Chus (Jorge Sanz) argue shamelessly while dining with a group of friends, Oscar (Darío Grandinetti) and Sara (Maria Barranco) make one desperate final attempt to work out their many marital discrepancies. Upon crossing paths later that evening, all four find that a temporary solution to their problems is enough for their relationships to weather the emotional storm for the time being. Years later, in the emergency room of a local hospital, the two couples' paths cross once again as Elena and Chus celebrate the birth of their son while lamenting the growing emotional divide that keeps them from truly connecting. Though an unspeakable tragedy has befallen Oscar and Sara, Sara and Chus develop a supportive friendship that helps to guide them through the darkness as Elena and Oscar cross the boundary from friendship into something far more intimate.

Farid Fatmi
as Kamal
View All

There are no critic reviews yet for Stormy Weather. Keep checking Rotten Tomatoes for updates!

There are no featured reviews for Stormy Weather at this time.