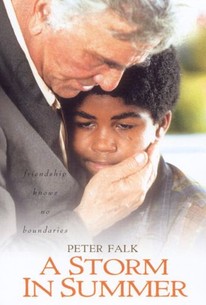 Robert Wise brings his distinguished name and considerable directorial skill to this remake of a 1970 Rod Serling TV drama. Set in 1969, Abel Shaddick (Peter Falk), a crotchety deli owner, has a grudge against virtually everyone in his upstate New York town of Fairview, particularly against his slacker nephew Stanley (Andrew McCarthy) who lives behind the shop. Without telling his uncle, Stanley agrees to put up a needy city kid for the summer as part of a charity program run by rich debutante Gloria (Nastassja Kinski). Abel immediately vetoes the plan, but it is too late. The kid, young Herman Washington (Aaron Meeks), is already on his way. Though initially the two intensely dislike each other, they bond over fishing and war heroes -- Abel's son died during WWII, while Herman's brother was killed in Vietnam.

Ty Olsson
as Biker
View All

Critic Reviews for A Storm in Summer

There are no critic reviews yet for A Storm in Summer. Keep checking Rotten Tomatoes for updates!

Audience Reviews for A Storm in Summer

There are no featured audience reviews yet. Click the link below to see what others say about A Storm in Summer!

A Storm in Summer Quotes