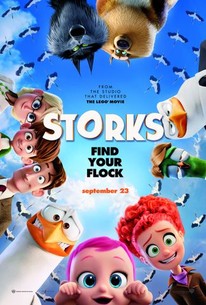 In this animated children's fantasy, two storks (voiced by Kelsey Grammer and Andy Samberg) reveal the truth about their job delivering babies to new parents.

How Family-Friendly are Assassin’s Creed, Passengers, Sing, and A Monster Calls?
On DVD This Week: Sully, The Magnificent Seven, Storks, and More
Box Office: Magnificent #1 Opening For Denzel and Crew

A popsicle-coloured, 3D cartoon with a pertinent, if somewhat hard to explain conceit.

The visual ingenuity is breathtaking.

Even storks must move with the times.

After softening you up with whatever the comedic equivalent of a triple somersault with a half pike and double twist is, it lands on its emotional target - we're talking freely trickling tears - with a persuasive and satisfying thud.

Storks is charming, if often nonsensical in its plot line and frenetic in its pacing.

Storks is consistently funny, it moves like the wind, and it's bizarre enough that adults might get more out of the odd storyline than kids just wanting to find out where babies come from.

[T]aps into the imaginations of kids as well as the poignant wistful memories of parents everywhere - and does so through a wide range of humor and solid storytelling.

Storks is pure fun, a delight start to finish.

I have to say I was pleasantly surprised by it.

On the whole, Storks is an uneven, at times even lacklustre film.

It gets the laughs in thanks to a delightfully weird streak - all wrapped up in a pleasantly banal animated style.

Answering the age old question of where babies come from, Storks is a rather cute family comedy. Over a decade after the Storks switched from baby delivery to package delivery a worker accidentally activates the long dormant baby factory; forcing the new boss, Junior, to try to secretly delivery the baby before anyone finds out and he loses his job. Featuring the voice talents of Andy Samberg, Katie Crown, Kelsey Grammer, Jennifer Aniston, and Danny Trejo, the cast is pretty good and do an impressive job at creating fun and interesting characters. And the animation is well-done, with a lot of imaginative character and set designs. Yet the storytelling is a bit lacking, as it's not always clear where it's going and kind of meanders at times. While it has some problems, Storks is an entertaining film that delivers a lot of laughs.

Storks,like The LEGO Movie,has a not-really complicated story,packed in a fast 1 (and a half) hour movie,along with his gags and a heartbreaking last scene.

Storks is an amiable and occasionally touching little animated flick with one ingenious comedic sequence involving creepy penguins and a sleeping child. However, Storks had the potential to be even funnier and even more poignant had it really stuck to one thing, instead of hundreds ideas thrown in a blender and swirled onscreen. The idea of a family mending their love for each other with the arrival of a child and the unlikely stork and girl mission to deliver the child, had a lot of warmth in premise. Throw in a villainous pigeon, shape-shifting wolves and dialogue spit out at an abnormally quick pace, Storks loses balance and becomes just another ok animated film. And maybe that's ok. Storks is cute and funny, just not enough of either to distinguish itself. Rating: 63