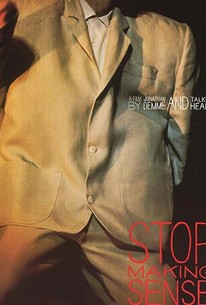 Stop Making Sense was the first feature-length documentary effort of filmmaker Jonathan Demme. The director's subject is The Talking Heads, a new-wave/pop-rock group comprised of David Byrne, Chris Franz, Tina Weymouth and Jerry Harrison. The film was made during a three-day concert gig at the Pantages Theater in Hollywood. What emerges on screen says as much about director Demme's taste and sensitivity as it does about the group and its visionary leader Byrne. Though some of the material in Stop Making Sense overlaps with the Talking Heads' earlier concert film The Name of This Band is Talking Heads, one never gets the feeling of by-the-numbers repetition; the group's energy is such that it virtually explodes from the screen. ~ Hal Erickson, Rovi

Chris Frantz
as Drums and Vocals

Chris Frantz
as Drums and Vocals

Jerry Harrison
as Guitar, Keyboards and Vocals
View All

It's a treat for fans (Heads heads?), and a chance for the uninitiated to tune in to the band that has come to personify postmodernist rock 'n' roll.

The overwhelming impression throughout Stop Making Sense is of enormous energy, of life being lived at a joyous high.

It's Byrne's spiritual performance that pulls us in and takes us on a life-affirming joyride.

Byrne is the auteur here; Demme is the rare, generous sort of filmmaker who would emphasize that.

Like Talking Heads itself, Jonathan Demme's landmark 1984 film is accessible and arty. In less skilled hands, it would simply feel alien and cold, not vibrantly and enthrallingly alive.

It's all so precise even as it is totally loopy, and the music pressed up in our face so urgently and enticingly, that the movie is as close to perfect as it gets.

Stop Making Sense is a concert film with a narrative, bursting at the seams with bits of invention and passion.

This ain't no disco, but it is a party.

One of the best concert movies ever.

...the greatest concert film ever made

The cinematic technique is intriguing, and although it's unnoticeable to the audience's perspective the industrial details derived from this film are revolutionary. It's one of the most interesting concert documentaries of all time, and remains a unique experience with narrative, character, passion and creative innovation from all involved.

High energy concert featuring the Talking Heads. If this doesn't make you want to get up and dance, there is something seriously off. The music is infectious, the band is at the top of their form, the stage is sparse, the lighting is dramatic, the camera work is phenomenal, and David Byrne is a genius. I haven't had this much fun in a while. No time is wasted on innocuous commentary or interviews, just all music, all the time. I only wish I could have been there. It just doesn't get any better than this.

Finally got around to watching this. I thought it was good, but slightly overrated. A pretty good live show and solid energy, but it's a little dated now. The opening number with just Byrne and the boombox was gold though.