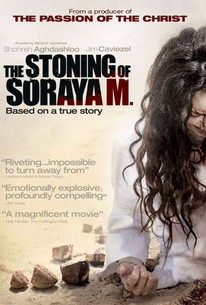 Critics Consensus: The Stoning of Soraya M. nearly transcends its deficiencies through the sheer strength of its subject material, but ultimately drowns out its message with an inappropriately heavy-handed approach.

Critics Consensus: The Stoning of Soraya M. nearly transcends its deficiencies through the sheer strength of its subject material, but ultimately drowns out its message with an inappropriately heavy-handed approach.

Critic Consensus: The Stoning of Soraya M. nearly transcends its deficiencies through the sheer strength of its subject material, but ultimately drowns out its message with an inappropriately heavy-handed approach.

The Stoning of Soraya M. Photos

Director Cyrus Nowrasteh teams with screenwriter Betsy Giffen Nowrasteh to illuminate the dangers of religious fundamentalism, gender apartheid, and mob rule with this fictionalized adaptation of Freidoune Sahebjam's best-selling novel centering on a true-life tragedy. The story takes place in 1986, just as Khomeini is coming into power in Iran. Undercover French journalist Freidoune Sahebjam (Jim Caviezel) is traveling though a small southwestern village when his car breaks down. Surrounded by strife but left with little choice other to wait until his car is repaired, the anxious Freidoune is soon approached by persistent local Zahra (Shohreh Aghdashloo), who convinces him to follow her into the courtyard behind her home. There, she reveals to him that she has just borne witness to a most heinous crime. Just the previous day, Zahra had watched the men or her town stone an innocent woman to death. That woman was Soraya (Mozhan Marnò), long-suffering wife of abusive tyrant Ali. Soraya wed Ali in an arranged marriage, never realizing the horrors that she and her children would endure under her husband's heavy hand. When Ali requested a divorce so that he would be free to marry a 14-year-old girl, Soraya boldly refused, knowing that she and the children would most certainly starve to death without a husband to support them. Ali was too poor to return Soraya's dowry as custom dictates in a divorce, but he found another way out of the marriage. Under Shariah law, adultery is a crime punishable by death if the accused is unable to prove her innocence. Scheming with the newly installed, counterfeit mullah, Ali accused his wife of adultery. In order to ensure that she had no chance of defending herself, he blackmailed several male villagers to testify on his behalf. A tribunal was quickly called, and Soraya's fate forever sealed. ~ Jason Buchanan, Rovi

Bita Sheibani
as Leila
View All

News & Interviews for The Stoning of Soraya M.

Critics Consensus: Transformers 2 Is Less Than Meets The Eye

View All The Stoning of Soraya M. News

Critic Reviews for The Stoning of Soraya M.

[A] well-intentioned, but laboured and woodenly acted film, based on a true story.

This is The Wicker Man but with scary English country folks replaced with the supposed Axis of Evil.

This harrowing film spares no physical or emotional detail.

Whatever its dramatic flaws, and they are many, this is a movie that, in essence, is more than a movie.

Despite some wonderful performances, the plot plods inexorably and with sickening predictability towards the inevitable conclusion, but nothing can prepare us for the actual event, which Nowrasteh films in real time and in shocking detail.

Though The Stoning of Soraya M.' s heart is in the right place, its head is lost in storm clouds of anger.

If you sit down expecting entertainment and chuckles then you are going to be disappointed, but if you want to be moved and enlightened then this is one film for you.

As a documentation of an outrage, designed to horrify the world and make it pay attention, it works very well.

Melodramatic, yes, but this powerful, disturbing film is based on a real event in mid-Eighties Iran, which makes it easier -- or perhaps harder -- to bear.

Take even a cursory look around the planet: unjust, senseless death is not going away anytime soon...

Audience Reviews for The Stoning of Soraya M.

Anyone interested in what goes on in religio-fascist cultures should see this horrifying and moving film about a woman tortured and ostracized for little reason other than that she's a woman. Powerful film.

This movie portrays a moment in1986 in an area of the world able to uphold the social graces of the Old Testament era. It is here that women can be bartered into marriage by their parents at the age of 13. They can be accused of adultery and be burdened with proving their innocence rather than burdening the accuser with proof of guilt. Lastly, women convicted of adultery can be stoned to death by their village and adulterous pedophile husbands in the name of righteousness. The film doesn't do any more than furiously outline this infuriating story. There is no attempt to understand the deep-seated cultural influences that prevent these values from evolving. A 2010 Pew research poll of Arab nations found that 84% of Egyptians favored the death penalty for anyone who leaves Islam, 82% believed adulterers should be stoned to death, and 77% favored cutting off the hands of robbers. Where is the movie that at least attempts to explore why?

The Stoning of Soraya M. is a film that every one should see. It is an extremely powerful, shocking, heart-wrenching and unforgettable film that looks into rural Iranian life, and the horrifying fate a woman might be forced into. Shohreh Aghdashloo, Mozhan Marno and the rest of the cast deliver superb performances that should have gotten award attention. NOTE: This film contains a long and very graphic, disturbing stoning sequence.

The Stoning of Soraya M. tells the story of a woman whose husband conspires to convict her of adultery. The isolated village strictly follows traditional Islamic law, and as a result of her husband's conspiracy, Soraya is brutally stoned. The performances by Jim Caviezel, Shohreh Aghdashloo, and Mozhan Marno are all quite strong, and it has been a long time since I've seen anything as blood-curdlingly sick as the stoning sequence. It is appropriately hard to watch. Despite how well-made the film may be, it never rises to anything more than a harsh polemic. Even a first-year journalism student would realize that the story, as it is presented in the film, is based only on one biased source, and she wasn't present at many of the most damning conversations. I haven't read the book, so I'm not in a position to truly doubt this story's veracity, but it was incumbent upon the director to present the story more credibly. Additionally, this event allegedly occurred in 1986; the book was published in 1990; why is it that the film doesn't come out until 2008? Gramsci might say that cultural artifacts "spontaneously" appear as a result of the then-contemporary political climate. He doesn't suggest that there's any type of conspiracy, but it does strike me as odd that this film finds a receptive audience during a time when U.S. foreign policy was rattling its saber at Iran and vice versa. Overall, this is a well-made film, but it's polemic as hell. You may find yourself agreeing with its political message, and to the degree that I whole-heartedly support women's rights, so do I, but Western audiences should be careful not to conflate what occurred in a remote village in Iran during the '80s with Islam or all of present-day Iran.

The Stoning of Soraya M. Quotes