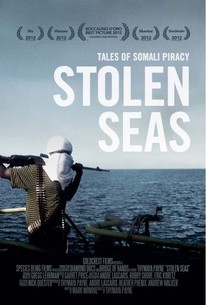 The filmmakers have spent the past three years traveling to some of the world's most violent locales in order to make this documentary on Somali piracy, Stolen Seas. Utilizing exclusive interviews and unparalleled access to real pirates, hostages, hostages' relatives, ship-owners, pirate negotiators and experts on piracy and international policy, Stolen Seas presents a chilling exploration of the Somali pirate phenomenon. The film throws the viewer, through audio recordings and found video, right into the middle of the real-life hostage negotiation of a Danish shipping vessel, the CEC Future. As the haggling between the ship's stoic owner Per Gullestrup, and the pirate's loquacious negotiator, Ishmael Ali, drags on for 70 days, these two adversaries' relationship takes an unexpected turn and an unlikely friendship is born. Stolen Seas is an eye opening refutation of preconceived ideas on how or why piracy has become the world's most frightening multi-million dollar growth industry. (c) Official Site

What really elevates the film ... is the crucial context that Payne provides to explain - but not justify - the pirates' actions.

A documentary of such ambitious scope that you might need a remote control and a notebook to keep up with it.

Digs deep into the subject of piracy, arguing that it's less an anachronism than a sign of the times.

Magnificent in its thoroughness and nuance, this dense, multifaceted study of Somali piracy really needs to settle down.

A dense, sometimes dangerous 90-minute immersion in a world where lawlessness applies to all sides and, shockingly, international shipping companies would rather pay the ransoms than address the underlying problems.

This drama is couched in illuminating context ...

With his much more than meets the eye pursuit of raw unfiltered truth, Payne navigates the turbulent waters of piracy, as it has been impacted by the legacy of colonialism and rebellion, and the military hardware industry profiteering also kicking in.

An admirably balanced, wide-ranging look at the phenomenon of Somali high-seas piracy ...

There are no featured audience reviews yet. Click the link below to see what others say about Stolen Seas!