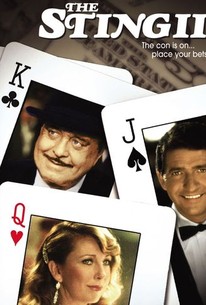 Made ten years after The Sting tickled and impressed audiences, this sequel lacks most of the charm, humor and surprise that made the first film such a hit. Featuring Jackie Gleason and Mac Davis in the roles originally essayed by Paul Newman and Robert Redford, the story centers on the attempts of the two con artists to fix an important prizefight to line their pockets and get revenge upon their nemesis.

Cynthia Cypert
as Girl in Club

Critic Reviews for The Sting II

Moves slowly, looks terrible and copies the first film shamelessly. Rather than a sequel, it's a retread, with David S. Ward's screenplay supplying hoodlum lingo you could cut with a knife and outlining a set of similar shenanigans.

First time round, if you got bored with the endlessly twisting convolutions of the scam, there were compensations in the fancifully nostalgic settings and the host of quirky minor characters. This time you stay bored.

So much of the intricate plot is explained in dialog that the first half of the film often seems like someone reading an instruction book.

This project should have been axed. Instead, it was made with Robert Redford replaced by Mac Davis(!) and Paul Newman replaced by Jackie Gleason(!!).

The film is flat, without any invention or humor. [Full Review in Spanish]

Oliver Reed and Karl Malden are welcome presences, and Teri Garr is the winner on all feminine counts, but this isn't enough to save it.

A clumsy counterfeit that is a real-life con game involving the ticket buyer.

The film was scripted by David S. Ward, who also wrote the original but added nothing new or special to this sequel.

Audience Reviews for The Sting II

Here's a movie that has no right to work, but somehow it does. Jackie Gleason and Mac Davis play the characters made famous by Paul Newman and Robert Redford...and yet, they don't. While their characters share the same last names, and obviously are meant to be the same characters, they all have different first names. I'm not sure what the intention was, but there you have it. When one of their old con gang is murdered by a mobster (same movitation from the first movie), they reuinte their gang to take him for everything he's worth. They are aided and hampered by the mobster they took for $500,000 years before. The individual performances by the two leads are fine enough, but they have none of the natural chemistry shared by Newman and Redford. Oliver Reed takes over for Robert Shaw as the Chicago banker they originally ripped off, and he has a certain fun with his role as the mystery manipulator of many of the characters. Karl Malden is the new mark, and he gives a good performance as the unknowing target of the con men's plan. Teri Garr is wooden as a 2x4 as Davis' love interest, and the lone woman in the con gang. Many people see this as blasphemy to the original, but while it is not even close to being in the same league as the first film, it's still an enjoyable con game, with its own share of twists and turns. Most of them predictable, but there are a couple of "didn't see that coming" moments. An interseting little distraction, and not nearly the cinematic afterbirth its been made out to be.