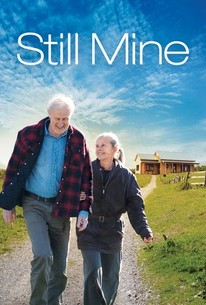 Critics Consensus: James Cromwell and Geneviève Bujold are outstanding in this tender, affecting, insightful drama about the bonds and sacrifices of marriage.

Critics Consensus: James Cromwell and Geneviève Bujold are outstanding in this tender, affecting, insightful drama about the bonds and sacrifices of marriage.

Critic Consensus: James Cromwell and Geneviève Bujold are outstanding in this tender, affecting, insightful drama about the bonds and sacrifices of marriage.

In his first lead role after decades of playing supporting characters, James Cromwell gives a tour de force performance in STILL MINE, an exquisitely crafted and deeply affecting love story about a couple in their twilight years. Based on true events and laced with wry humor, STILL MINE tells the heartfelt tale of Craig Morrison (Academy Award (R) nominee Cromwell), who comes up against the system when he sets out to build a more suitable house for his ailing wife Irene (Academy Award (R) nominee Geneviève Bujold). Although Morrison uses the same methods his father, an accomplished shipbuilder, taught him, times have changed. He quickly gets blindsided by local building codes and bureaucratic officials. As Irene becomes increasingly ill - and amidst a series of stop-work orders - Craig races to finish the house. Hauled into court and facing jail, Craig takes a final stance against all odds in a truly inspirational story. (c) Samuel Goldwyn

Ray Landry
as Announcer
View All

News & Interviews for Still Mine

View All Still Mine News

Critic Reviews for Still Mine

Growing old together can't be easy, but in this case, it's certainly beautiful.

Writer-director Michael McGowan covers all the bases here -- the long-standing romance between the aging couple, the hovering concerns of their son and daughter, the constant head-butting with the building inspector -- with well-paced confidence.

Writer-director Michael McGowan (Saint Ralph) shows affinity for the subtle undercurrents of a long, happy marriage, but the friction between Cromwell and the government bureaucracy stays one-note.

Bring a handkerchief, or possibly a bedsheet, to "Still Mine"; this fact-based, beautifully acted drama could wring tears from a brick.

[A] tough-minded tearjerker, based on a true story ...

It is about a husband and wife, partners through six decades, grappling with issues of aging, and how to spend what time together remains with grace and dignity.

While featuring two well-known leads from the annals of cinema, whose presence here is bound to attract a certain interest to the title, they are unfortunately encapsulated in a film as flat as a plateau and barren as wintry tundra.

Cromwell and Bujold are both a treat, and they have genuine chemistry together...

The Morrisons' relationship is real and complicated .

[Still mine] moves you to tears with a genuine and touching story of love, devotion and determination.

Still Mine has romance, passion, suspense, and a David-and-Goliath narrative that may make you want to stand up and cheer.

Audience Reviews for Still Mine

This was unexpectedly gorgeous Canadian romantic drama which was originally released under the title Still at the 2012 Toronto International Film Festival. Written and directed by Michael McGowan based on a true story, the film stars James Cromwell as Craig Morrison. His story is set in rural St. Martins, New Brunswick and he is a farmer living with a wife losing her memory. He decides to build a new house that caring for her can be more manageable but he has to battle a government bureaucrat (Jonathan Potts). The battle for the right to build a new house for his ailing wife Irene (Geneviève Bujold) is almost becoming ridiculous because the government keeps demanding compliance with the building laws without even checking the house... the certificats and stamps are more important than human life! It is a warm story of a senior love with the realities of aging that falls right in the middle, no excess on sweetness. I think that most seniors and families affected by Alzheimer's will find much to identify with and to enjoy even more... I use to be a carer for a person affected by it and I know how frustrating could be, testing all boundaries. It seems that the critics agree with me because the film garnered seven nominations at the 2013 Canadian Screen Awards, including Best Picture, Best Actor (Cromwell), Best Actress (Bujold), Best Original Screenplay (McGowan), Best Cinematography (Brendan Steacy), Best Editing (Roderick Deogrades) and Best Original Score (Hugh Marsh, Don Rooke and Michelle Willis). Cromwell won the award for Best Performance by an Actor in a Leading Role. If you like good acting, true story with its ups and downs, and a real love between two people being together over 60 years, please check this film which is for everyone who doesn't believe in bureaucracy!