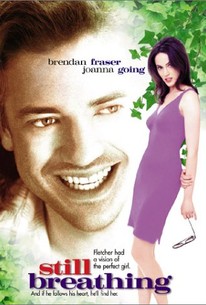 This romantic fantasy from writer, director, and producer James F. Robinson, stars Brendan Fraser as Fletcher McBracken, a starry-eyed San Antonio puppeteer who, like his father and grandfather before him, has a mystical vision of the woman he's fated to marry. Believing that she'll be found in "Formosa" (the one-time name of Taiwan), Fletcher books a flight. During a stopover in L.A., however, he learns of a trendy bar called Formosa and decides to check it out. Sure enough, Fletcher sees his dream girl, Rosalyn Willoughby (Joanna Going), a con artist on the lookout for a new mark, a millionaire from Texas. Assuming that Fletcher is the man she's supposed to bilk, Rosalyn accompanies him to San Antonio, where she meets his tuba-playing grandmother (Celeste Holm) and his eccentric friends, including the Tree Man (Lou Rawls). Charmed against her will by Fletcher, Rosalyn considers a real romance with the daffy artist, but each of them has some revelations to make before a real relationship can begin.

Junior Brown
as The Wrong Texan

Bill Gundry
as Man with Painting

Steve Lambert
as Man in Alley

Scott Land
as Puppeteer
View All

There's a depth and caring to Still Breathing that you don't find in the usual major studio fare.

This is a story that has been told many times before, but generally with more energy than this.

The film's success ultimately rests on the couple -- and not once in this film, aside from a lot of wispy talk about fate and dreams, did I see any reason why these two opposites would be drawn to each other.

A gooey, swooning swatch of romantic hyperventilation, its queasy charms. And let it be said that surrendering to those charms could be as guilt-inducing as polishing off a pint of Haagen-Dazs chocolate ice cream before lunch.

A light and bright romantic comedy.

Another fine attempt at breaking the mold of romantic comedy ... but lacking, oddly, the comedy.

Sweet, moving, and with an irresistible magic all its own.

If you're in the mood for a pleasant little romantic comedy, Still Breathing hits all the right notes. Cynicism need not apply.

A story that places no constraints on happy coincidences, as this one, always teeters on the brink of corniness.

A charming romantic comdey with a soft southern feel to it.