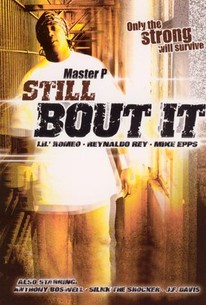 Rapper and No Limit Records mogul Master P directs and stars in this sequel to the urban drama I'm Bout It, which helped launch his career in 1997. Still Bout It finds Perry, aka Pistol P (Master P), fresh out of prison and eager to turn over a new leaf. After hooking up with his running buddy Vito (Silkk the Shocker), Pistol P moves in with his Aunt Tee Dee and strikes up a friendship with his nephew M.J. (Lil' Romeo), a youngster with a talent for basketball. Pistol P gets a job in a restaurant and takes some classes at a local college, but with money short and academia not suiting him, he finds himself tempted to go back to the gangsta life; however, when a gang of drug dealers led by Trouble (Ameer Baraka) begin staking out the neighborhood, Pistol P takes it upon himself to drive away the bad element for the sake of his family.

Silkk the Shocker
as Vito

Critic Reviews for Still Bout It

There are no critic reviews yet for Still Bout It. Keep checking Rotten Tomatoes for updates!

There are no featured reviews for Still Bout It at this time.