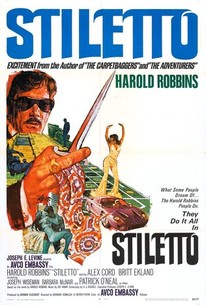 Cesare (Alex Cord) is the foreign car dealer who caters to the jet set. A previous favor by a mobster who saved his life has him indebted to the mafia to repay the kindness. With a stiletto, he kills three enemies of the organization, but is hung out to dry when the gang refuse to acknowledge his actions or even admit they know him. As the police close in on the auto dealer, he is caught between the law and the mob with no protection from either side. Britt Eklund and Barbara McNair are the main female leads. Roy Scheider has a small part in this violent and erotic crime drama.

Michaelina Martel
as Blonde at Casino

There are no critic reviews yet for Stiletto. Keep checking Rotten Tomatoes for updates!

There are no featured reviews for Stiletto at this time.