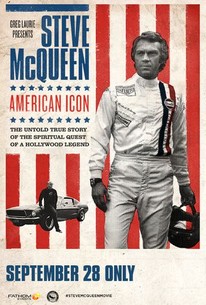 Fathom Events and Greg Laurie present the compelling documentary, Steve McQueen: American Icon, including a special message from Greg Laurie and performance by MercyMe, in select cinemas nationwide on Thursday, September 28 only. This film tells the story of the life of one of America's most enduring and intriguing movie stars. A redemption story which chronicles McQueen's exodus from the world of fame and fortune and his little-known search for meaning, truth and significance. The story is hosted by Greg Laurie, one of America's leading pastors, who is not only an avid McQueen fan, but also experienced a similar childhood. The primary interview for this documentary is Steve's wife Barbra Minty McQueen who, as a New York model and amateur photographer, took hundreds of never-before-seen candid photographs. Other interviews include Academy Award (R)-winning actor Mel Gibson, renown stuntman Stan Barrett, celebrated McQueen biographer Marshall Terrill, actors Barbra Leigh and Mel Novak.

Steve McQueen
as Self

Mel Gibson
as Self

Mel Novak
as Self

Barbara Leigh
as Self

Stan Barrett
as Self

Greg Laurie
as Self

Barbara Minty McQueen
as Self
View All

Its hammering home of the religious angle in the final segment feels more than a little heavy-handed.

The most compelling parts of the film are recordings where McQueen himself appears to be trying to dispel his title as "The King of Cool" and talks quietly and humbly about the pain that led him to Christ.

There are no featured reviews for Steve McQueen: American Icon at this time.