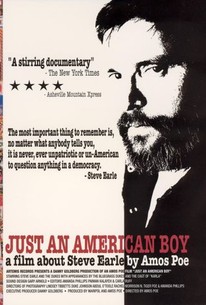 In the fall of 2002, singer, songwriter and political activist Steve Earle released an album of songs written in the wake of the terrorist attacks of September 11, 2001, entitled Jerusalem. One of its songs, "John Walker's Blues" -- written from the perspective of John Walker Lindh, a Muslim from America who was discovered fighting alongside Taliban forces -- triggered off a flurry of controversy, and Earle found himself having to defend his views, his patriotism, and his right to free speech in the press. Steve Earle: Just an American Boy is a documentary which follows Earle as he tours in support of the Jerusalem album, speaks to journalists about his songs and the looming war in Iraq, writes and directs his first play (Karla, a dramatization of the life and death of Karla Faye Tucker, the first woman ever to be executed by the Texas penal system), discusses his outspoken opposition to the death penalty, and, with his band, shows why he's become one of the most critically acclaimed singer/songwriters of his generation. Steve Earle: Just an American Boy was directed by Amos Poe, who previously helmed the groundbreaking document of New York's nascent punk rock scene, Blank Generation.

Decidedly low-tech and not always particularly coherent or cohesive.

While the film's coziness toward its subject is ultimately frustrating, it does provide a welcome portrait of one of the music industry's genuine and rare iconoclasts.

Even for a big fan like me, parts of this documentary (especially musical performances) just go on too long.

Earle's song introductions, like those of his mentors Townes Van Zandt and Guy Clark, are as meaty, pointed, and touching as the tunes themselves, and his spoken words -- full of humor and humanity -- are the heart of the film.

A crude but stirring video documentary.

In Just an American Boy, Steve Earle proves that he just may be the most important American troubadour of his generation

Did it make me want to run out and buy his albums? Well, maybe not, but it did make me like the man and respect the activist -- and the artist. Three out of four ain't bad

Earle -- and his fans -- deserve better.

There's a tantalizing excerpt from Earle's performance of 'John Walker' on Fox News, but otherwise we mostly see him working his broad catalog for adoring crowds.

There are no featured audience reviews yet. Click the link below to see what others say about Steve Earle: Just an American Boy!