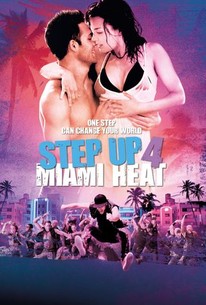 Step Up Revolution is the next installment in the worldwide smash Step Up franchise, which sets the dancing against the vibrant backdrop of Miami. Emily (Kathryn McCormick) arrives in Miami with aspirations of becoming a professional dancer and soon falls in love with Sean (Ryan Guzman), a young man who leads a dance crew in elaborate, cutting-edge flash mobs, called "The Mob." When a wealthy business man threatens to develop The Mob's historic neighborhood and displace thousands of people, Emily must band together with Sean and The Mob to turn their performance art into protest art, and risk losing their dreams to fight for a greater cause. -- (C) Summit

Katie Peterson
as Woman by the Ocean

Alejandro Posada
as Man by the Ocean

News & Interviews for Step Up Revolution

Parental Guidance: Men in Black III, ParaNorman, and Step Up Revolution
Critics Consensus: The Watch Falls Down On the Job

View All Step Up Revolution News

Critic Reviews for Step Up Revolution

The Step Up dance franchise steps up for a fourth time, unashamedly and unselfconsciously sticking to a tried and trusted formula, here transplanted to Miami.

The new leads are as factory‑farm gorgeous as ever, and the movie's alcopop fizz and snappy choreography save the day as usual.

Nothing much here that you couldn't experience by watching 20 minutes of music television.

It's equal parts 'Flashdance,' 'Burlesque' and 'Lambada', all parts ludicrous - but we aren't here for the story any more than we watch Béla Tarr for the salsa numbers.

There's too much color and energy and frenzy in this movie to discount it entirely, but it has a disconcerting tendency to undercut its best notions with some singularly awful moves.

With the most wooden leads of the series to date - an MMA fighter and a "So You Think You Can Dance" alum - the drama between the dancing has never felt more interminable.

There just wasn't enough of the blockrocking beats and big phat high octane dance numbers to offset the megadownload of cheese.

There are only so many times you can watch the plucky dance crew try and save the rec center.

All that fancy footwork, supported by high production values, makes Step Up Revolution a watchable and even inventive sequel.

Is there love in the air for our toe-tapping duo? Could this be any more predictable?

It provides exactly what its fans expect and want from it but even as an unabashed lover of cheesy, terribly acted dance films, this reviewer was shocked at just how enjoyable this one was.

The ubiquitous product placements tend to undercut the anti-corporate speechifying.

Audience Reviews for Step Up Revolution

While still riddled with cliches, "Step Up 4: Revolution" is one of the better instalments in the franchise, bringing in an entirely new cast and having a much bigger scale for it's dance choreography. The cinematography and choreography really are the best parts of this film, and even though the characters are not the greatest, by the end you may just feel yourself caring about them. There is one huge problem with this film and that is the main plot, which is the same as son many films out there, but I liked that it did not take over the story and it was just a small element to the film. These films are meant to have a little character development, an easy story to follow, and a likeable cast in order to get us to the final dance sequences, and this film accomplishes that for the most part. You really have to be a fan of cool dancing to enjoy these films, and since I am, this did it for me and I want to see more. The reason I like these later sequels is sue to the fact that they are doing right by their material, which is what the earlier films failed to do. Overall, it's not the most memorable film, but it is fun enough.

One step can change your world. Saw it again! Very enjoyable movie! Great moves! Strength of will and right attitude are the main ingredients for getting what you want. It is not always about being in the right place at the right time. But also making sure those two will meet you half way. Overall Step Up Revolution may be one of the better movies of this series. With awesome moves, fitting soundtrack, and decent acting, it's definitely refreshing for the audience. However it is still a dance movie with a lot of skewing towards dancing and less to story, so don't expect masterpiece. The Mob sets the dancing against the vibrant backdrop of Miami. Emily arrives in Miami with aspirations of becoming a professional dancer and soon falls in love with Sean, a young man who leads a dance crew in elaborate, cutting-edge flash mobs, called "The Mob". When a wealthy business man threatens to develop The Mob's historic neighborhood and displace thousands-of people, Emily must work together with Sean and The Mob to turn their performance art into protest art, and risk losing their dreams to fight for a greater cause.

This film has as much plot as the trip I just took in my trip to the restroom. I'm sorry, I usually put more class in my reviews but when a film is completely unnecessary and had no work put into the story of the film then I will put no effort into making a review for it... it was well choreographed. There.