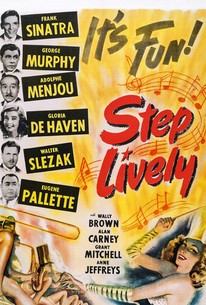 Previously filmed as a so-so Marx Brothers vehicle in 1938, the John Murray-Alan Boretz Broadway hit Room Service was effectively musicalized in 1944 as Step Lively. The plot remains intact: Fly-by-night theatrical producer Gordon Miller (Groucho Marx in the 1938 film, George Murphy in the remake) struggles to keep his production and cast together, despite severe deficiencies in the money department. Hotel-chain supervisor Wagner (Adolphe Menjou) threatens to throw Miller and his actors off the premises, an eventuality Miller hopes to forestall until he can obtain $50,000 from a wealthy backer. Meanwhile, Glen Davis (Frank Sinatra), the author of Miller's play, shows up to see how things are going. Before long, Glen is swept up in a desperate plot hatched by Miller and his underlings Binion (Wally Brown) and Harry (Alan Carney) to stay in the hotel despite Wagner's efforts to oust them. Caught in the middle are hapless hotel manager Gribble (Walter Slezak), potential backer Jenkins (Eugene Pallette), Glen's sweetheart Miss Abboli (Anne Jeffreys) and Miller's leading lady Christine (Gloria DeHaven). This being a musical, the outcome hinges on Glen's hitherto untapped singing ability, which might save the day if he overcomes a bout of psychosomatic laryngitis.

Frank Mayo
as Doorman
View All

Without the Marx Brothers, the music improves but the comedy proves witless.

...empty-headed, to be sure, but it's also breezy, lightweight, antic fun

Sinatra is in fine voice but this musical is minor in almost every way. A good supporting cast is wasted.