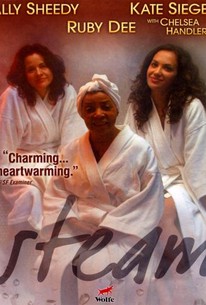 Three women struggle with the joys and sorrows of love in this three-part drama from writer and director Kyle Schickner. Teenaged Elizabeth (Kate Siegel) has been raised in a conservative, deeply religious household, and when she goes away to college she revels in her first taste of freedom. Elizabeth falls into a relationship with Niala (Reshma Shetty), an attractive and free-spirited bisexual, and is introduced to the heady pleasures of sex. However, while Elizabeth is deeply in love with Niala, she soon discovers that Niala puts little stock in exclusive relationships. Laurie (Ally Sheedy) is in her mid-forties and has lost nearly everything in a messy divorce, including full custody of her son, who now spends half his time with his father and his new (and younger) wife. Laurie is so filled with resentment and anger that she can scarcely get through the days until she meets her son's soccer coach, who wastes no time letting Laurie know he's smitten with her. And Doris (Ruby Dee) is an elderly woman who is deep in mourning after the death of her husband. While friends and volunteers from her church try to help Doris break out of her funk, she seems inconsolable until she meets a man her own age who lost his wife. The two bond over their shared loss and fall in love, but while they're eager to marry, the man's son is convinced Doris' motives are not pure.

Ron Bottitta
as Tom
View All

The clichés are thicker than the Steam in Kyle Schickner's hackneyed dramedy.

So cheesy and so poorly acted that it should never have seen the light of day.

If these one-dimensional stereotypes were to hit the steam room, they'd go quite limp.

Writer-director Kyle Schickner embraces every cliche with gusto. (Behold the cruel intolerance of the patriarchy!)

[Director] Schickner's reach exceeds his grasp. In trying to tell three stories simultaneously in a two-hour running time, he allows for too many developments that seem driven more by plot than character.

Any film with Ruby Dee, Ally Sheedy and Lane Davies is an embarrassment of riches. What a pity writer-director Kyle Schickner didn't know what to do with the talent he had to work with.

This is a movie that I can safely recommend to both my sister and my mom, to Republicans and Democrats, to my students in college to my son's elementary school teachers, to my close friends and even total strangers. Not many movies are like that. There's

Convoluted, contrived and bland while failing to be truly endearing, insightful or believable in terms of drama and romance.

There are no featured audience reviews yet. Click the link below to see what others say about Steam!