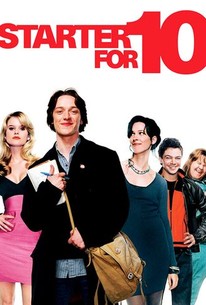 Critics Consensus: Starter For 10 is a spirited coming-of-age tale that remains charming and witty even as it veers into darker teritory. The unique setting of a quiz show makes the film wittier than your average romantic comedy.

Critics Consensus: Starter For 10 is a spirited coming-of-age tale that remains charming and witty even as it veers into darker teritory. The unique setting of a quiz show makes the film wittier than your average romantic comedy.

Critic Consensus: Starter For 10 is a spirited coming-of-age tale that remains charming and witty even as it veers into darker teritory. The unique setting of a quiz show makes the film wittier than your average romantic comedy.

A working-class English boy who has been fortunate enough to be accepted into a posh private university struggles to realize his lifelong dream while simultaneously winning the heart of the girl he loves in a romantic, bittersweet comedy directed by Tom Vaughan and starring James McAvoy, Rebecca Hall, and Charles Dance. The time is the mid-'80s, and the University Challenge phenomenon is sweeping through England. Despite his underprivileged background, Essex boy Brian Jackson (McAvoy) knows that he has what it takes to make it to the finals on one of the most popular programs in all of England. Upon being accepted into Bristol, the ambitious young student soon tries out for the school's University Challenge team, and set the gears of his ultimate fantasy into motion. Effectively estranged from his single-parent mother (Catherine Tate) just for being accepted into the school, Brian soon gets set to cross yet another class line when he becomes smitten with his beautiful University Challenge teammate and attempts to woo her into his arms her with his formidable advanced general knowledge skills.

Joe Van Moyland
as Hippie at the Party

News & Interviews for Starter for 10

View All Starter for 10 News

Critic Reviews for Starter for 10

McAvoy carries the picture confidently enough as a leading man, and there is a nice performance from Benedict Cumberbatch.

This is expertly crafted entertainment that follows all the beats of a traditional romantic comedy, but it's done with such sincerity that it's difficult to begrudge the odd descent into cliché.

There's nothing here we haven't seen done better before.

[The film] bears many of the hallmarks of teen comedies, but also boasts virtues not generally associated with the genre, such as wit, class consciousness, multidimensional characters, and a penetrating intelligence.

Starter For Ten comfortably makes the grade for rib-tickling entertainment.

McAvoy is piling up an impressive resume of leading-guy roles for an actor who doesn't at first glance possess leading-guy looks.

Adhering to every convention of the coming-of-age film in a sneakily alluring way and flirting with cliche without slobbering all over it, this sweet little date-night flick is built to charm everyone's inner 18-year-old.

While the love story is predictable, the amusing quiz show storyline and excellent post-new wave soundtrack almost make up for it.

Pure feel-good romantic nostalgia, whether you lived in 1980's London or not.

A sweet, funny nostalgia trip back to the '80s for the anglophile in all of us.

Audience Reviews for Starter for 10

Liked this one a lot - I like anything with an 80's theme, generally, but this actually is very likeable and has some funny bits to it. Rebecca Hall was the standout here. I loved her dry, intelligent character.

A young James McAvoy delivers in Starter For 10, a slightly cliched romance-comedy feature.

What's not to love about a nebbish, made-under James McAvoy with daddy issues? As with Rachel Weisz, I prefer Rebecca Hall's American accent to her own British.

This is the one movie the cliches of a romcom can be completely forgiven as the adaptation of David Nicholls' own novel still imparts its conventional wit and characterization that completely worked out with the script and its genre. It's a bit shy on its dramatic aspect but there's its romantic moments and comic scenes that stood out and that distinguishes itself from other romcom flicks.