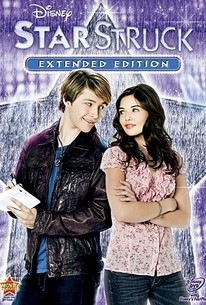 A teen with a taste for pop music has a chance encounter with her favorite singer and experiences a Hollywood adventure beyond compare in this upbeat teen musical for the entire family. For Sara Olson (Maggie Castle), pop star Christopher Wilde (Sterling Knight) is the best thing to happen to music since the microphone. But her younger sister Jessica (Danielle Campbell) doesn't want anything to do with her older sibling's obsession. When the two sisters venture out to LA to visit their grandmother, Sara leads Jessica on a frantic race around town in hopes that they will catch a glimpse of the popular singer. Much to her surprise, they're soon standing face to face with Christopher, and being treated to a guided tour of the city, pop star-style. Later, when Christopher gets the opportunity to cross over into movies, he grows worried that his fame may be having an adverse effect on his personality. Perhaps a friend like Sara is all Christopher needs to help put his glamorous life in perspective, and make the career choices that best reflect his own personal values. ~ Jason Buchanan, Rovi

Starstruck is entirely forgettable after seeing it from the grown-up perspective.

...the film's progressively tedious vibe [is] compounded by the inclusion of an eye-rollingly pointless fake break-up towards the end.

Parents need to know that this squeaky-clean Disney movie is a worry-free choice for tweens. Sara's infatuation with Christopher -- while possibly grating on parents' nerves -- may resonate with viewers and raise some issues about our celebrity-obsessed s

For a teen film, StarStruck has great music, a solid romantic-comedy backbone, and decent performances. Only the illogical moments and shortcuts keep it from being an unqualified success.

better than expected, however the acting is not adequate, characters are campy, audience cannot relate to the characters

A typical silly teenie bopper movie. The only reason I watched it is because my friend Abbie plays a role in it. It wasn't that bad though, even though it was at times really ridiculous.