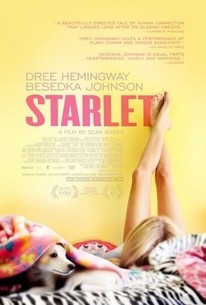 Starlet explores the unlikely friendship between 21 year-old Jane (Dree Hemingway) and 85 year-old Sadie (Besedka Johnson), two women whose worlds collide in California's San Fernando Valley. Jane spends her time getting high with her dysfunctional roommates, Melissa (Stella Maeve) and Mikey (James Ransone), while taking care of her Chihuahua, Starlet. Sadie, an elderly widow, passes her days alone tending to her flower garden. After a confrontation between the two women at Sadie's yard sale, Jane uncovers a hidden stash of money inside a relic from Sadie's past. Jane attempts to befriend the caustic older woman in an effort to solve her dilemma and secrets emerge as their relationship grows. -- (C) Official Site

Manuel Ferrara
as Himself

Asa Akira
as Herself

Jules Jordan
as Himself

Kristina Rose
as Herself

Baker effectively juxtaposes two vastly different worlds, though he never makes the case that either is as significant as the gauzy visuals suggest.

This is confident, engrossing storytelling, and the actors are terrific.

Starlet sneaks up on you.

Where it counts, "Starlet" ... allows its characters room to maneuver within the potential cliches.

The film itself deserves praise for its portraits of these two women and the different worlds they inhabit.

Baker directs with such sensitivity and grace, allowing the story to reveal itself in a disarmingly moving way.

...has a sunny SoCal vibe that belies its tawdry milieu

Their friendship goes nowhere you might expect - Sadie doesn't teach Jane any hard-won life lessons, and Jane doesn't try to rekindle Sadie's lost youth. There are no montages here.

Either avoids or transcends nearly every cliché we've come to associate with American independent film.

No amount of strong acting, however, can entirely compensate for the dramatic conveniences or every shrill appearance by Jane's cartoonishly despicable roommates.

In "Starlet," Jane(Dree Hemingway) wants to add a few touches to her room, but her housemate Melissa(Stella Maeve) tells her not to get too ambitious because Mikey(James Ransome) might need the space to film occasionally. So, Jane checks out every yard sale in southern California, finding a thermos she plans on converting into a vase. That is until she finds about $10,000 in cash inside. After the obligatory shopping spree, Jane feels bad and tries to return the thermos to Sadie(Besedka Johnson) but cannot quite get the right words out. So, Jane looks for another way to make amends like giving Sadie a ride home from the supermarket. And like the saying goes, no good deed happens without a macing... "Starlet" is an unpredictable, modest and off-beat movie whose humor comes from misperception and preconceptions that even manages to make bingo suspenseful. All of which is centered around a realistic take on the adult film industry that makes it out to be neither good nor bad.(Whether that scene is necessary is debatable. In any case, the film skirts the topic until then.) It just is. The only down side for the performers here is having young women achieve a level of instant fame before they have any idea of the person they will become. Jane is off to a better start than Melissa because she at least thinks about the future and considers other people, even if she makes her share of mistakes when not thinking things through. As far as Sadie goes, not much is really known until that enigmatic final shot.

Starlet is about an unlikely friendship forming between 21 year-old Jane and the elderly Sadie after Jane discovers a hidden stash of money inside an object at Sadie's yard sale. I ended up liking this much more than I expected. Much like "Future Weather", Starlet tells a simple story containing more depth than what's on the surface. The unique relationship between two different generation of women interacting with one another is fascinating to witness. These two women have different ideals, personalities, and well rounded relationship that changes both output on life. Not only does it show that porn actors can have a heart, but also the darker side of the industry effecting personal lives. It's solely a film driven by the characters which most are highly developed. I didn't mind spending time with the central characters even if the activities they underwent were ordinary and at times just lingered around without a director. Except one flaw comes from the character of Mikey who's the boyfriend of our protagonist roommate is decidedly one note. Another problem are the supporting characters are simply in service to move to the plot. The film does not focus a huge amount of time on Jane's job only rarely seeing her do any actual work. So for those wanting an in depth look of how a porn actor is affected by their profession look elsewhere. In the end Starlet plot is naturalistic, simple to follow and one requiring a lot of thought the events we witness that what's on the surface. The major upside of this film comes its incredibly talented cast. Dree Hemingway excels in portraying the root of her character. I could imagine other actresses going for a full dramatic take, but would have not been as effective as what Dree Hemingway did. Dree Hemingway is energetic playing a cheerful slacker while handling the duality of her playfulness and lack of maturity when she needs to swift. Besedka Johnson in her first (and last) role will amazed. Johnson has a steady relationship with Hemingway and it very sympathetic without revealing too much in her actions. At first when we see Johnson she's appears as nothing special, but grows on you. The supporting cast is decent and in terms of visuals there is some nice scenery, but nothing to get excited about. Starlet is simplicity in nature, but filled with more depth in execution. Well rounded character portrayed by leads both giving standout performances make the viewing even more engaging. Starlet might not be for everyone due to it simplistic story, but those who see will be rewarded with a deep story under the surface and fine performances.

When "Starlet," the new film from cinema-vérité expert Sean Baker, is at its best, it's deeply emotional and filled with under-stated brilliance. At its worst, it's boring and aimless. It's a mixed bag with "Starlet." But when it's good, it's very, very good. Dree Hemingway (daughter of Mariel Hemingway) plays a young woman in Los Angeles getting started in the pornography business. But "Starlet" is not much interested in the pornography. The focus of the film is an odd friendship that the girl strikes up with a crusty, bitter 80-year-old woman, played superbly by first-time actress Besedka Johnson. Johnson is so good that I wouldn't be surprised if she wins some Best Supporting Actress awards - or at least some nominations. I don't know how Baker does this. He finds untrained, natural actors everywhere he goes. It's one of his specialties. Baker first began attracting attention in 2004 when he partnered with Shih-Ching Tsou to make "Take Out," a gritty examination of the army of Chinese men who bicycle around Manhattan delivering Chinese food for $2 tips. He followed that up with "Prince of Broadway," another hand-made movie with a cast of immigrants, this time from the Caribbean. "Starlet" is not exactly cinema-vérité, but it does have something of a hand-made quality. The casting of Johnson, furthermore, a "real person" as opposed to a professional actor, gives the film that unique Baker touch. Some have described Baker as reminiscent of John Cassavetes. I can see the resemblance. But Baker has a long way to go in terms of story development if he wants to be anywhere near as good as Cassavetes. Both "Take Out" and "Prince of Broadway" suffered terribly from under-development in the story department. Baker is the kind of filmmaker who believes that if a person looks interesting and very real, an audience will want to watch him/her walk down the street for 90 minutes. Not so. For most people, including most intelligent cinephiles, watching a unique person walk down the street remains engaging for about five minutes. The other 85 minutes must show the person involved in something that's interesting. The character's being in and of itself is not that intriguing. We need to see his being in action. And the action, furthermore, must be thought-provoking -- walking down the street is not interesting action. Baker appears to have been working on this. "Starlet" is a step forward. There is more story in "Starlet" than in his previous two films combined. But there's still not enough. There are too many slack, repetitious moments in "Starlet," and there is too little revealed about the characters. Baker never gets inside his characters; he watches them from very far away. In a sense, he's more of a cinematographer than a filmmaker. He likes to watch his characters, but he doesn't seem to have much interest in what they have to say. When he writes dialogue, it's bare bones. In a Baker film, the dialogue is really beside the point. This makes his films more like appetizers than entrées. They always whet my appetite but not much more than that. But there's no denying that "Starlet" has magical qualities. There are moments of truly stunning visual poetry. And its vision of these unique characters is deeply tender. I love how Baker finds humanity in the most unlikely places. When other artists are looking at the people who stand out and make an impression, Baker is noticing the guy who's delivering the take-out food, or the old crone playing bingo by herself to whom no one has spoken in years. I love that he directs his artistry toward these people. I just wish he penetrated inside their worlds more deeply.