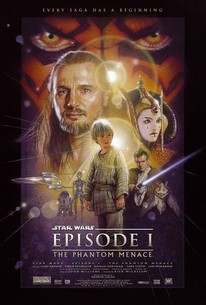 Critics Consensus: Burdened by exposition and populated with stock characters, The Phantom Menace gets the Star Wars prequels off to a bumpy -- albeit visually dazzling -- start.

Critics Consensus: Burdened by exposition and populated with stock characters, The Phantom Menace gets the Star Wars prequels off to a bumpy -- albeit visually dazzling -- start.

Critic Consensus: Burdened by exposition and populated with stock characters, The Phantom Menace gets the Star Wars prequels off to a bumpy -- albeit visually dazzling -- start.

In 1977, George Lucas released Star Wars, the ultimate sci-fi popcorn flick-turned-pop-culture myth machine. It quickly became the biggest money-making film of all time and changed the shape of the film industry. After two successful sequels (1980's The Empire Strikes Back and 1983's Return of the Jedi) that extended the story of the first film, Lucas took some time off to produce movies for others, with mixed success. In 1999, Lucas returned to the Star Wars saga with a new approach -- instead of picking up where Return of the Jedi left off, Star Wars: Episode I -- The Phantom Menace would be the first of a trilogy of stories to trace what happened in the intergalactic saga before the first film began. Here, Obi-Wan Kenobi (Ewan McGregor) is a young apprentice Jedi knight under the tutelage of Qui-Gon Jinn (Liam Neeson); Anakin Skywalker (Jake Lloyd), who will later father Luke Skywalker and become known as Darth Vader, is just a nine-year-old boy. When the Trade Federation cuts off all routes to the planet Naboo, Qui-Gon and Obi-Wan are assigned to settle the matter, but when they arrive on Naboo they are brought to Amidala (Natalie Portman), the Naboo queen, by a friendly but opportunistic Gungan named Jar Jar. Qui-Gon and Obi-Wan plan to escort Amidala to a meeting of Republic leaders in Coruscant, but trouble with their spacecraft strands them on the planet Tatooine, where Qui-Gon meets Anakin, the slave of a scrap dealer. Qui-Gon is soon convinced that the boy could be the leader the Jedis have been searching for, and he begins bargaining for his freedom and teaching the boy the lessons of the Force. The supporting cast includes Pernilla August as Anakin's mother, Terence Stamp as Chancellor Valorum, and Samuel L. Jackson as Jedi master Mace Windu. Jackson told a reporter before The Phantom Menace's release that the best part about doing the film was that he got to say "May the Force be with you" onscreen. ~ Mark Deming, Rovi

Michaela Cottrell
as Even Piell

News & Interviews for Star Wars: Episode I - The Phantom Menace

12 Movie- and TV-Tied Video Games We Can’t Wait to Play
Hear Us Out: The Phantom Menace Is Still The Purest Star Wars Movie
The 50 Highest-Grossing Movies of All Time: Your Top Box Office Earners Ever Worldwide

View All Star Wars: Episode I - The Phantom Menace News

Critic Reviews for Star Wars: Episode I - The Phantom Menace

The movie is fun, for the most part, and several scenes are as good or better than anything Lucas created in the original films. The human characters, however, are not nearly as interesting as those in the earlier episodes.

Do kids really want to follow a plot about intergalactic trade embargoes?

The visual effects in The Phantom Menace are so good that you find yourself not caring very much about Qui-Gon's prophetic murmurings.

What I can't comprehend is why the political details had to be so tedious and abstract. Will the kids of our nation and the world truly be titillated by trade wars and the spectacle of a do-nothing Senate?

Look, I wanted to love The Phantom Menace, too. I was an adolescent boy and would enjoy being one again for a couple of hours. But the movie has a way of deflating all but the most delusional of hopes.

Mr. Lucas is not without a certain technocratic sagacity, but I don't think he's communicating even with the young as astutely as he once did.

Star Wars Episode I: The Phantom Menace gives us a great set up for what is to come in the future with Anakin & Palpatine. And for that, I am thankful. The rest is not great.

The Phantom Menace instead is a bold announcement that the new films will do their best to try something new every time. They won't always succeed, but even in failure there is glory.

The dialogue isn't the issue; the acting isn't really the issue; nor is it any single annoying character... There's no sense of wonder. No yearning. No spirit.

Star Wars: Episode 1 - The Phantom Menace gets the saga off to a bit of a rough start.

One of George Lucas' creative high points - an excellent look at the failings of a society on the brink. The original subversive Star Wars entry.

It lacks alarmingly a very high percentage of the MAGIC that its predecessors had. [Full Review in Spanish]

Audience Reviews for Star Wars: Episode I - The Phantom Menace

This movie is terrible

Phantom is a frustrating watch, however there are elements worth admiring: its ambition plot, Williams' score, the art direction, and the iconic duel with Darth Maul.

Filled with horrific dialogue, laughable characters, a laughable plot, ad really no interesting stakes during this film, "Star Wars Episode I: The Phantom Menace" is not at all what I wanted from a film that is supposed to be the huge opening to the segue into the fantastic Original Trilogy. The positives include the score, the sound effects, and most of the visual effects, which provide some great eye candy for audiences, but if that's all the film has, then what the hell is the film's purpose? It does helm one of the best lightsaber battles in the franchise and there are a few fun fan service moments, but I don't have anything else nice to say, and I could rant for days, so I am stopping here. This film is a complete mess in every way, but it still could have been worse.

I've had a saying that I've used for almost 20 years now in relation to The Phantom Menace. I compare the film to waking up Christmas morning expecting some great present only to receive socks. Nothing against socks. They have a place and are quite needed, but there's no flash with it. The same goes for The Phantom Menace, a film that really doesn't live up to the excitement of the films that came before it. The film follows the early adventures of Obi-Wan Kenobi (Ewan MacGregor) and Anakin Skywalker (Jake Loyd), the boy found in the Tatoine desert by Master Qui-Gon Jinn (Liam Neeson). In that sentence the film sounds like it would have some potential. Throw in trade routes, treaties, and Jar Jar Binks and you derail any exciting ideas that are out there. Sadly, this is what the film focuses on as it fails in many ways. Bloated with CGI overindulgence and dialogue that is embarrassing the film relies on its action, which it hands out in spoonfuls. Looking back over 15 years later you can see what a great film this could have been. The opening scenes with the Jedi fighting droids and hiding on the planet of Naboo. The pod race. The ending with three fronts and Darth Maul. If these sections could have been bridged in a better way than this could have been a far superior film than it turned out to be. Why, of why, didn't we get more Darth Maul when he was plastered on every piece of merchandise back in 1999? There are the parts to a good Star Wars film there, just not enough hardware to pull it together. Would it have compared to the originals? No, but that's ok. This film was parsecs away from those films (error intended) What The Phantom menace represents is the footing that the saga is built on. It's buried deep underground and doesn't serve much purpose. It's there doing its job, even if it's an ugly mess. Kind of like socks. I've softened a bit on the film, but I can't call it anything more than average. That's it. An average film equals a horrible Star Wars film. Even years later this is still one of the most disappointing films of all time.