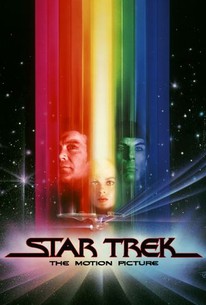 Critics Consensus: Featuring a patchwork script and a dialogue-heavy storyline whose biggest villain is a cloud, Star Trek: The Motion Picture is a less-than-auspicious debut for the franchise.

Critics Consensus: Featuring a patchwork script and a dialogue-heavy storyline whose biggest villain is a cloud, Star Trek: The Motion Picture is a less-than-auspicious debut for the franchise.

Critic Consensus: Featuring a patchwork script and a dialogue-heavy storyline whose biggest villain is a cloud, Star Trek: The Motion Picture is a less-than-auspicious debut for the franchise.

When a destructive space entity is spotted approaching Earth, Admiral Kirk resumes command of the Starship Enterprise in order to intercept, examine and hopefully stop it.

Every Star Trek Movie Ranked from Worst to Best
Now Streaming: Blade Runner, Scarface, The Exorcist, and More
Where Will Star Trek Boldly Go Next?

There are only so many ways to photograph black starry space and the under-bellies of spaceships, and the films that got there first used them all up.

What you see is what you respond to, and what you see is a unique cultural phenomenon, and a film that for all its visual splendors falls well short of its aspirations.

Not so much a movie as it is a sort of giant display case ...

Nothing but a long day's journey into ennui.

The expensive effects (under supervision of Douglas Trumbull) are the secret of this film, and the amazing wizardry throughout would appear to justify the whopping budget.

This 1979 movie adaptation of the cult TV series is blandness raised to an epic scale.

The first earnest attempt to foster large scale public interest in a moribund property that had survived up to that point solely on the enthusiasm of its small, devoted following.

Merely a weak, inapt Star Trek movie, not a completely awful one.

Star Trek's freshman big screen effort was crippled by a plodding pace and a somber tone.

More of an event than a movie...more flash than content.

If the endless interstellar vistas of 2001: A Space Odyssey tested your patience, Star Trek: The Motion Picture will make you cry like a little star child.

The main problem with this first Star Trek film is that it is not original at all and looks more like a stretched TV episode that tries too hard to be 2001: A Space Odyssey, dragging endlessly in long, contemplative scenes that seem to exist only to show the higher budget.

To think this this film came out when I was just one year old, just like Star Wars which came out a year before I was born, makes me think...my God Jim...I'm old! I've never been a huge Star Trek fan and never will be in all honesty. I did always enjoy the films with the original classic crew but never got into any of the TV series, especially the new stuff. I always preferred the Star Wars franchise for many reasons but mainly because it always looked so superior in virtually every department. This first Trek movie really does show the difference between the two franchises which both appeared in the same era, not taking anything away from Star Trek but it always did look more fake and plastic looking. The effects in this first movie are a mixed bag really. The sequences towards the finale inside V'Ger don't look too bad (nice 2001-esque fantasy lighting effects), various spaceship shots look nice throughout and the costumes although drab don't age too badly. For the most part this film has aged badly if we're brutally honest about it, I don't wanna keep comparing it to Star Wars but there is a clear difference in quality which still stands to this day. What I did always like about Trek was the way it tries to be realistic or at least approach things in a realistic fashion. I'm Not sure if they are merely homaging or copying '2001' but you can clearly see the influences in one sequence as we are treated to a grandiose panorama of the [i]Enterprise[/i] as she sits in her docking bay accompanied by a stirring Trek instrumental score. This epic approach is a far cry from the flashbang blaster fire and roaring starcruisers of a certain George Lucas affair. Star Trek is definitely aiming at the grown-ups here, the real sci-fi enthusiasts who name Kubrick's space opus as their holy bible...which Wise clearly did too. I do like the way Wise gave the film a slow pace. Lots of character and background building alongside plenty of mission dialog and technical problems that might occur in reality for such a scenario. Its all classic Star Trek as you would remember from the original series but on a sexier scale with props that actually do look kinda real. In fact there's even more politically correct...goody two-shoes...prime directive...Federation type babble than you can wave a stick at, and Shatner loves his speeches. The film was criticised for this slow unadventurous style but personally I like it, its one of the more realistic Trek movies offering exactly what you got with the original TV series...but prettier. I still to this day don't really understand why some folk (even Trek fans) don't like it. The main aspect of this film I like is the plot, yes the plot. Seems straight forward enough as the team are sent to intercept a mysterious alien phenomena heading towards earth, but I liked how the plot has its intriguing twist at the end. Again just like the classic show you get the danger and mystery with a cute little twist to keep you on your toes. Its not groundbreaking but it just makes you think a little, right up to the very end you're unsure what the hell will happen. How Kirk will save the day and what's the deal behind the alien cloud thing, that's good story telling right there methinks. The continuity from the TV show to the big screen was handled well I thought although I'm no Trek expert. You have all the crew doing what they are best at of course, some new crews members (redshirt fodder perhaps?), plenty of well known typical Trek visuals and sounds, the crew handle most of the action from the ships bridge via the good old big screen on the wall and the [i]Enterprise[/i] looks slick with a bit of spit n polish to tart it up for the big screen. Sure its not an in your face phaser fest with hand to hand fights against large lizard men but I for one thought the serious route was a good way to go. The film is more of an exploration adventure, it takes its time, slowly builds up, lots of space jargon...you don't know what their on about half the time but it just sounds good...I use my realism card again. It feels like a point n click strategic adventure game for your PC...I guess? One of the oddest things when you think about it was the fact Wise directed this. You tend to remember Robert Wise for the Hollywood epics 'The Sound of Music' and 'West Side Story' which are two of the greatest musicals ever made probably. So its kinda funny to think he directed the first Star Trek movie, then again he did direct 'The Andromeda Strain' and 'The Day the Earth Stood Still' so he did have some good sci-fi experience. Overall the special effects look fuzzy in places, lots of beige colour schemes going on with the ship and crew, plenty of nasty bluescreen evident I'm afraid...but its still very enjoyable sci-fi. Star Trek has its own little niche of being semi-serious and approaching everything logically but still utilising just enough fantasy to make it a charming pleasant ride.

The first Star Trek film directed by Robert Wise manages to capture the vibe of the TV show and offer fans a good two hours of entertainment. Although, this film isn't a classic by any means, it's still enjoyable for what it is. There has been far better science fiction film, but this first film in the Star Trek franchise is quite good despite the fact that it does show its age. With this film, director Robert Wise crafts something entertaining, a film that has a good storyline, impressive performances and an effective mix of action and thrills. Fans of the show will surely enjoy this picture, and it's an effective continuation of what Gene Roddenberry accomplished with his show. I enjoyed this film, but like I said, it looks dated and the effects on-screen don't hold up too well. Nonetheless it's still an effective, entertaining Sci Fi film, one that should be seen by genre fans looking for a well constructed film. The sequel;, Wrath of Kahn would definitely improve on the elements that are lacking within the film, but as it is, Star Trek: The Motion Picture is entertaining from start to finish, but as a whole, it does leave a bit to be desired, which is what the follow up would improve upon. I must admit, I never was big into Star Trek, but I enjoyed this film and I felt that director Robert Wise, of whom I've enjoyed his previous work, is well suited to tackle this first big screen outing of the classic show. Despite the fact that I don't believe that this film is a genre classic, as it really didn't break new grounds in the genre, this film will surely appeal to viewers that are looking for a good Science Fiction film to watch.

The first in the long running movie franchise was a huge departure from the ethos of the series it was based upon, and as such disappointed the majority of fans who were expecting more of the same kitsch hi-jinx and polystyrene sets that endeared themselves to so many. The Motion Picture prefers to take its cues from more grandiose, epic sci-fi tales such as 2001: A Space Odyssey and although its inspirations are very obvious, it does very well in capturing a sense of awe and wonder that space exploration (at least used to) conjures up. The stars of the show are most certainly the pairing of SFX legends Trumbull and Dykstra and the visuals of this film are still astonishing to this day, and the addition of Jerry Goldsmith's suitably operatic score makes the original Trek film an audio-visual feast. The ponderous pace of the film will certainly put a lot of the Abrams generation off, but it is littered with many lovely character moments that are done with a lot more subtlety and sophistication than the increasingly silly and kitsch sequels, and Leonard Nimoy's Spock once more dominates the proceedings as his inner struggle with his emotions is echoed by the mysterious machine that threatens them. The plot is simple but clever and effective and the art design alone makes this film well worth the watch. It won't be to the taste of action junkies but those with a penchant for cerebral sci-fi can't fail to enjoy what for me is still amongst the very best of the Star Trek franchise.