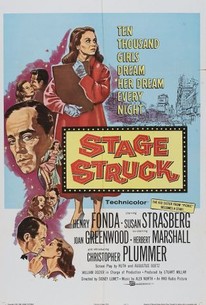 This remake of Zoe Akins' Morning Glory stars Susan Strasberg as Eva Lovelace, the role that won Katharine Hepburn her first Oscar back in 1933. Fresh from the midwest, the starry-eyed Eva arrives in New York, convinced that she has what it takes to be Broadway's greatest actress. Armed with more chutzpah than talent, Eva proves fascinating to big-time producer Lewis Easton (Henry Fonda) and playwright Joe Sheridan (Christopher Plummer, in his film debut). But the realization of her girl remains just outside of Eva's reach until she replaces temperamental star Rita Vernon (Joan Greenwood) on the opening night of Sheridan's newest play.

Clint Young
as Tom the Chauffeur

It never gets past its clichés.

There are no featured audience reviews yet. Click the link below to see what others say about Stage Struck!