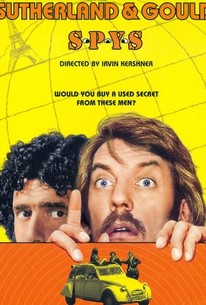 In this spy spoof, two CIA functionaries (Elliott Gould and Donald Sutherland) have been given a fairly routine task: they must arrange the defection of a Russian ballet dancer (Michael Petrovich). For some reason they bungle the whole affair, as they have many others, and, under a prior arrangement with his KGB counterpart, the CIA chief agrees to have the pair exterminated. Their efforts to survive the combined ill-will of the two most powerful spy agencies in the world involve them with a host of unusual characters.

Hella Petri
as Prostitute
View All

There are no critic reviews yet for S*P*Y*S. Keep checking Rotten Tomatoes for updates!

Another movie which pairs Sutherland and Gould, directed by Kershner (who's most famous for directing Empire Strikes Back). It's really pretty funny for the most part, and quirky too. I enjoyed it.