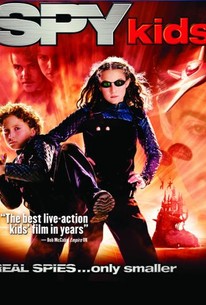 Critics Consensus: A kinetic and fun movie that's sure to thrill children of all ages.

Critics Consensus: A kinetic and fun movie that's sure to thrill children of all ages.

Critic Consensus: A kinetic and fun movie that's sure to thrill children of all ages.

Gregorio and Ingrid are the two greatest secret agents the world has ever known: masters of disguise, mavens of invention, able to stop wars before they even start. Working for separate countries, they are sent to eliminate their most dangerous enemy...each other. But in an exotic corner of the world when they finally come face to face, they fall in love instead and embark on the most dangerous mission they have ever faced: raising a family. Now, nine years later, after their retirement, having exchanged the adventure of espionage for parenthood, Gregorio and Ingrid Cortez are called back into action. When their former colleagues, the world's most formidable spies, start disappearing one by one, the Cortez's are forced to take on techno-wizard Fegan Floop and his evil, egg-headed sidekick, Minion. But when the unthinkable happens and they too disappear, there are only two people in the world who can rescue them...their kids. Armed with a bag of high tech gadgets and out-of-this world transportation, Carmen and Juni will bravely jet through the air, dive under the seas and crisscross the globe in a series of thrilling adventures on a mission to stop Floop, save their parents...and maybe even the world. Sometimes the biggest heroes are the smallest ones.

Angela Lanza
as Newscaster
View All

In terms of its family ethos, this makes an interesting comparison with the Addams Family films.

As a piece of almost dadaist filmmaking, Spy Kids is great fun with its continual spirit of invention.

The action itself -- despite some bright, funny moments -- is often quite ordinary.

A good live-action children's movie -- a species so rare that many presumed it extinct.

The visual effects don't really hold up 10 years later, but Spy Kids is still a charming, energetic, inventive kids' flick that balances its goofier side with its a sense of dramatic maturity.

Just the right combination of fantasy and comedy.

The kids play off each other very well and never miss a beat with perfect-timed humor and acting.

The coolest kid flick in ages.

Robert Rodriguez tones down on the violent and vulgar vibe he's accustomed too and trades it with fun and family-oriented adventures, and it actually pays off. Spy Kids is engaging and has enough for children as well as adults to enjoy. 4/5

I get the feeling that at one point in Spy Kids the film makers tried to make these kids look cute and a bit more life like but somewhere I think they went wrong. Not as good as it puts itself out to be.

usually critics judge kids movies by adult standars, but fans see kids movies for what they are. with spy kids, its the opposite. the critics get this movie, and fans are entirely too hard on it. a solid kids film that brings little ones into the same sort of fantasy that james bond does for their parents. fun and silly but full of adventure, this is a solid flick.

A very enjoyable film, its fun and colorful. But like others said, maybe too kid friendly. The cast is funny and good, they picked the right kids for the movie. The plot may be a little ridiculous, but its perfect for kids, and it is Spy Kids. The action is the perfect mix for kids, but adults will be bored maybe. Overall I can't understand all the negativity, I like Spy Kids.