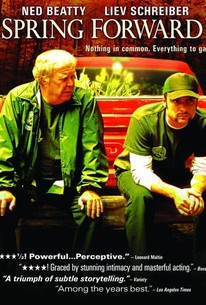 Playwright and character actor Tom Gilroy made his feature directorial debut with this dialogue-driven character study set against the backdrop of the changing seasons. Liev Schreiber plays Paul, a short-fused ex-con who finds unlikely comfort, stability, and camaraderie when he takes an odd job in park maintenance. On his first day, he's teamed with Murph (Ned Beatty), a groundskeeping veteran who manages to defuse an outburst between Paul and their snide supervisor (Campbell Scott). Paul sticks with the job, and, as the months pass, he and Murph work their way through events both mundane and monumental, all the while sharing their hopes, regrets, and ambitions. Shot in sequence over a one-year period, Spring Forward received a third-place mention for best first feature at the 1999 Toronto Film Festival.

David Roland Frank
as Boy with Snowblower
View All

Beatty and Schreiber generate a convincing camaraderie that is warm and touching yet with a refreshing lack of sticky sentiment.

A breath of fresh air, and an antidote to all the mindless drivel Hollywood churns out on a regular basis.

Here's a film that values good dialogue and complex characters over dramatic gimmicks and cheap action.

A remarkable film, totally absorbing from the first frame to the last. It's a marvel of simplicity and depth, comfort and compassion.

every moment is jam packed with a philosophical or heavy moment, never giving his characters a chance to breath

...a pair of big-budget performances by Beatty and Schreiber.

While seeming to be about nothing in particular, it gradually builds toward a deeply affecting emotional impact by actually being about everything that's important.

The performances are all fine and heartfelt, but the story itself never provides much reason for us to care.

Beatty and Schreiber give accomplished performances, but are handicapped by the staginess of the script and the static nature of Gilroy's direction.

A marvelous movie about a friendship that slowly unspools between two unlikely souls.

Very slow...kind of didn't get the point of it all.