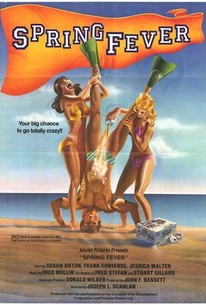 In this lively sports comedy, a 13-year-old rising star on the tennis circuit struggles to make the grade, but finds her way impeded among her snooty colleagues because her mother is a Vegas showgirl.

The movie's not great, but it's not awful, either. It's also not about spring fever, beaches, bikinis and spray cans. You know how it is. You win some, you lose some.

A hot shot golfer (William Haines) gets invited to play at a country club by his boss, and is drawn to a young lady he meets there (Joan Crawford) in this romantic comedy from 1927. The golf bits in the film are pretty predictable, but it's interesting to see their outfits, and to hear him refer to his favorite club as a spoon (which upon googling I find was a common term in this era). More interesting is the relationship between these two, because Haines wants to continue a life of leisure and golfing by marrying a rich lady, making him a male gold-digger, which I haven't seen much of in old films. The way it plays out with Crawford is interesting and a little unexpected as well, but I won't spoil it. There are some cute intertitles, and they add to the charm of the film. In one subtle double entendre, after he accidentally hits her backside with the backswing of a practice motion, he says "I'm sorry - honest - that's the first time I ever hit anybody on the links." In another scene, after she's upset and run off to her room, he tries to peek through the keyhole, and then says in baby talk "Won't oo let oo ittle boy friend make upsie wiv oo?" In still another, as he ponders his fate, he laments "I thought I was the whole maple forest, but I'm only the sap." I also liked when the lights are turned out so that the screen goes dark for a minute or so, and the two talk back and forth via intertitles on the left and right halves of the screen, which was also novel for the period. Crawford and Haines have nice chemistry together as well. I wouldn't necessarily say they're steamy here, but in one nice scene, he embraces her from behind to help her with her golf stroke, and in another, she holds him close and runs her fingers around his lips. How fantastic it was to find out that they were lifelong friends, and that she supported his homosexuality, saying of his relationship with his lifelong partner that it was "the happiest marriage in Hollywood," when of course, they weren't legally permitted to be married. This film isn't a classic or anything, but it's cute and has heart.