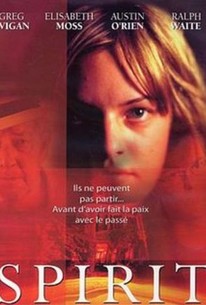 Not long after the death of her mother in a car accident, Kelly (Elisabeth Moss) and her father Jesse (Greg Evigan) move to New Orleans. Their new house is reportedly haunted--and Kelly is convinced that the ghost is begging for her help. Jesse, however, is more skeptical, and with the assistance of Kelly's troublesome friend Cole (Austin O'Brien) he tries to prove that the "haunting" is actually a manifestation of Kelly's own guilt feelings. As it turns out, however, both Kelly and Jesse are right! Evidently intended for theatrical release, Spirit was first seen in the US as a cable-TV offering on the Lifetime channel.

There are no critic reviews yet for Spirit. Keep checking Rotten Tomatoes for updates!

There are no featured reviews for Spirit at this time.