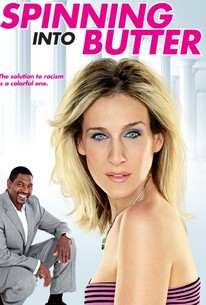 Critics Consensus: Both leaden and stilted, Spinning into Butter is an unsubtle drama with stagy direction and lackluster dialogue.

Critics Consensus: Both leaden and stilted, Spinning into Butter is an unsubtle drama with stagy direction and lackluster dialogue.

Critic Consensus: Both leaden and stilted, Spinning into Butter is an unsubtle drama with stagy direction and lackluster dialogue.

Sarah Jessica Parker produces and stars in stage director Mark Brokaw's adaptation the Rebecca Gilman play concerning a newly hired dean of students at an elite New England college who finds her life consumed by chaos following a vicious series of hate crimes. Sarah Daniels (Parker) was just settling into her new position when she was placed in charge of the investigation into a series of racially motivated campus crimes. Having previously worked at an inner-city school, Sarah makes the decision to get the police involved when Dean Catherine Kenney (Miranda Richardson) and President Winston Garvey (James Rebhorn) -- both more concerned with maintaining the institution's untarnished image than actually capturing the culprit -- begin to question her authority at every turn. Later, when investigative reporter Aaron Carmichael (Mykel Williamson) arrives on campus after receiving an anonymous telephone call, Sarah is saddled with the responsibility of escorting the journalist in order to squelch any potentially negative press. When a "Forum on Race" conducted by Professor Burton Strauss (Beau Bridges) against Sarah's recommendation turns into an all-out riot, the emerging truth about the crimes forces the emotionally shattered dean of students to confront her own long-dormant prejudices.

News & Interviews for Spinning Into Butter

Critics Consensus: Monsters vs. Aliens Is A Blast

View All Spinning Into Butter News

Critic Reviews for Spinning Into Butter

The biggest lesson from Spinning Into Butter has nothing to do with the ethics of race and more with realizing that every hit play doesn't need to be turned into a movie.

The staging by theater director Mark Brokaw, in his first feature, is, well, stagy. I don't mind a movie where people spend a lot of time jawboning, but what they say had better be interesting.

The foils have no compunction about hurling ugly truths at each other, most of the time much too literally to work on screen.

The material is crying out for a satiric wit or at least a stronger point of view. Instead, it's a mishmash in which everyone gets to say his piece, but all of it has been said before.

Spinning Into Butter is the perfect example of a movie taking an interesting premise and, through incompetence of acting, writing and directing, turning it into an unwatchable mess.

if you're not interested in a sermon, you'll want to skip this one

Butter makes a disastrous transition to film, aiming to salvage pertinent points on the witch's brew of racism through a filmmaking undertaking perhaps best described as "total clown shoes."

Painfully earnest and unrelievedly stilted and cliched, the movie is less a drama than a well-meaning but rather ridiculous diatribe.

Initially compelling, but spins into a hodgepodge of contrived scenes, uneven drama and poorly developed, yet provocative issues that simmer for too long without actually coming to a boil.

Crash was a master class in subtlety compared to Spinning Into Butter.

Audience Reviews for Spinning Into Butter

I saw this film for my Theater in Film class. While the film is undeniably well intentioned, that only goes so far for a film. It does what it sets out to do, but it doesn't do it incredibly well. Acting/Characters: In terms of characters, there is nothing here that hasn't been seen before a million times. The characters here ask the same questions about racism that films such as Crash, Do the Right Thing, and To Kill A Mockingbird do. They just don't do it as well. The characters aren't as well done as they could be. The acting overall of the film is pretty laughable. But like with most bad acting films (not all by any means) that is the fault of the screenwriter. They want to do well with their performances I know they do, they just can't. 3/10 Plot: Like I said before, there's nothing in here that isn't done better in films like Crash or Do the Right Thing. Its pretty predictable overall. Even the ending. It tries very hard to ask the right questions and for all intents and purposes it does. I don't think that they tried as hard as they could to answer them. To me, they just point out the problems. Maybe they do because there is no real solution. Racism is a pins and needles issue with no definitive answer. So, I guess I can't bash them too much for not answering the questions they ask. It's a thoroughly predictable plot that we've seen many times before. It has great intentions, but little merit beyond that. 3.5/10 Screenplay: yeah, this was the worst part of the film. I mean, the screenplay was written by the writer of the original stage play so I should have expected that it would be better than it was. My theater in film teacher said that there are differences between the script of the movie and the script of the play. Maybe the script for the play was better. If so why didn't you stick to it!? *sigh* 1.5/10 Likableness: I didn't particularly enjoy this film. It was mildly interesting and was well intentioned, but it had no real merits outside of that. This isn't a movie I would suggest to anyone. If oyu want to watch a movie like this, watch Do The Right Thing. That movie was excellent. 2.5/10 Final Score: 10.5/40 26% (S) I couldn't find any TRIVIA TIME stuff for this movie. That makes it even worse.

I was happy to see Brooklyn College (the college that I attended) in this film, as the college where most of the action takes place. On the positive, the acting is really good. On the negative, the film feels too much like an after school special or a Lifetime TV film of the week. I figured out right away which character is doing the hate crime.