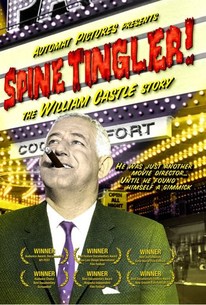 Over the course of a Hollywood career that spanned five decades, William Castle directed dozens of movies and earned a reputation as a clever hand with a low-budget thriller, but the movies he made aren't always as well remembered as the way he sold them to the public. During the Fifties and Sixties, Castle was one of Hollywood's greatest and most shameless showmen, and he achieved some of his greatest box office successes with movies promoted with outlandish gimmicks. Castle's reign as the King of Gimmicks began with 1958's Macabre, in which he gave each member of the audience a $1,000 insurance policy against being scared to death by the film. With his next release, 1959's House on Haunted Hill, theaters were equipped with "Emergo," in which a plastic skeleton would fly through the theater on wires at certain moments in the action, and for The Tingler, released later the same year, seats were wired with electrical buzzers to give patrons a shock as "materialized fear" stalked the screening room. While Castle later took up more respectable projects -- most notably producing Roman Polanski's film Rosemary's Baby and collaborating with famous mime Marcel Marceau on the bizarre fantasy Shanks -- his playful, gimmicky horror films are still remembered by film fans today, and Jeffrey Schwartz pays homage to his life and career in the documentary Spine Tingler!: The William Castle Story. In addition to clips from many of Castle's movies (as well as their trailers, many of which featured the director explaining his latest gimmick to prospective patrons), Spine Tingler! includes interviews with a number of fans and fellow filmmakers, including John Waters, Joe Dante, Leonard Maltin, Roger Corman and John Landis; the film received the audience award at the 2007 American Film Institute Film Festival.

Will remind audiences that the genre can be fun first and important second...

It's a portrait in contradiction, a man who finds success in gimmicks but so wants to be taken seriously.

Gone are the days when you could rig a movie theater's seats with electric buzzers to simulate a monster attack...but you can relive them via this exuberant tribute

A long overdue and very entertaining documentary on one of Hollywood's most colorful salesmen.

There are no featured audience reviews yet. Click the link below to see what others say about Spine Tingler: The William Castle Story!