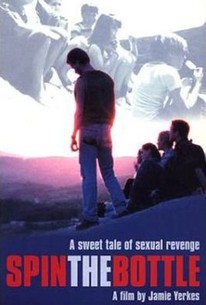 Jamie Yerkes' debut film Spin the Bottle takes its title from a game played by a group of friends in their mid-twenties. It seems none of them have seen each other since late childhood, and when the five spend a weekend together, it's a time for catching up on everything they've missed, including everyone's favorite adolescent party game. However, by the time Sunday evening rolls around, the five have learned more than they planned to know about each other's lives, secrets, follies, and disappointments. Spin The Bottle received positive notices in its engagement at the 1999 Santa Barbara Film Festival.

Heather Goldenhersh
as Rachel
View All

Critic Reviews for Spin the Bottle

There are no critic reviews yet for Spin the Bottle. Keep checking Rotten Tomatoes for updates!

Audience Reviews for Spin the Bottle

There are no featured audience reviews yet. Click the link below to see what others say about Spin the Bottle!