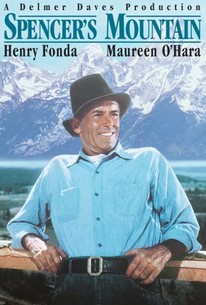 This sentimental dramatic comedy finds three generations of the Spencer family trying to make a living in their Wyoming mountain home. Clay Spencer (Henry Fonda) is the poor, hard working father who struggles to support his parents, his wife and their nine children. A homespun philosopher, Clay is a firm believer in God, but has no use at all for organized religion. He and his wife Olivia (Maureen O'Hara) long to give their children the education they could never afford for themselves. His oldest child is about to do something never before done by a Spencer by graduating from high school. With the arrival of a new preacher in town, Clay gets Preacher Goodson (Wally Cox) drunk. He searches for ways to pay for his son's college tuition while planning for twenty years to build his family a dreamhouse. Clay is vexed when the only available scholarship seeks someone for the seminary. When his son is deficient in his mastery of Latin, Preacher Goodson offers to tutor the boy to increase his chances for the coveted scholarship. When Clay's father is killed by a falling tree, he decides to sell a parcel of the family's land to help pay for college. Produced and directed by Delmer Daves, he also wrote the screenplay based on the novel by Earl Hammer, Jr. Hammer's original setting for the story was in the Blue Ridge Mountains, and his writing was the basis for the television show "The Waltons."

Mike Henry (I)
as Spencer Brother

This is a grab bag full of sure fire entertainment situations -- laughs, sentiment, tears, puppy love and the great outdoors.

There are no featured audience reviews yet. Click the link below to see what others say about Spencer's Mountain!