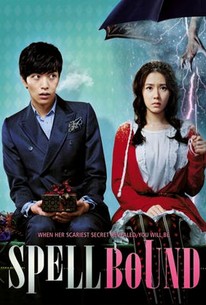 A budding romance between a girl who can see ghosts and a rising magician yields some supernatural complications in this romantic horror comedy from South Korea. Yeo-ri (Son Ye-jin) has been seeing ghosts for as long as she can remember. When the mischievous specters throw her social life into turmoil, Yeo-ri retreats into solitude until handsome magician Jo-goo (Lee Min-ki) hires her as his assistant. One year later, their act has become a resounding success, yet the apprehensive Yeo-ri still refuses to come out of her shell. Only when Yeo-ri finally reveals her ethereal secret to Jo-goo will she ever have a shot at true love, but even then the selfish phantoms seem intent on keeping her carefully isolated from the realm of the living.

Although much of the film's broad humor at times makes it feel like an unwanted mash-up of "Scary Movie" and "Date Movie," writer-director Hwang In-ho invests the material with enough clever scenarios to keep it engaging.

An understandable hit in its country, this Korean rom-com/horror film charmingly sneaks its way under your skin.

There are no featured audience reviews yet. Click the link below to see what others say about Spellbound!