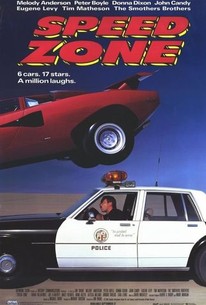 A sheriff struggles vainly to keep the annual Cannonball Run cross-country race from taking place in this comedy.

Carl Lewis
as Jogger
View All

A choppy, inconsistent film that often feels assembled from the deleted scenes of other movies.

The third Cannonball Run film is a mind-numbingly abysmal, cheapo Canadian production starring John Candy and a bunch of C and D listers. Might make a good answer to a trivia question, but this little-known sequel is truly pathetic.

They were going to call it Cannonball Run 3, but nobody involved with this production could count that high.

Much like the previous two movies this one opens with yet another red Lamborghini Countache, but this time its tearing down a small winding wooded country road, a change from the open desert. Naturally right behind this Italian supercar the cops are in hot pursuit. In the meantime Lee Van Cleef, in a very small cameo, plays an elderly grandfather teaching his grandson how to skip stones across a small lake. Van Cleef tells the young boy how to throw the stone at just the right angle so it can skip across the water. All of a sudden the red Lambo comes roaring up to the waterline and flies across the obviously shallow lake, skipping just like a flat stone...kinda, it then takes off once it hits dry land. The young boy looks at his grandfather and asks him about the angle he should throw the stone, Van Cleef looks at the car in disbelief and...annoyance I guess. The whole setup is cheesy as hell and doesn't really work to be honest, its not funny at all and Van Cleef is wasted totally, shame. The intro is good, its always good to see an 80's Lambo tearing it up, but it doesn't hold a candle to the first two movie intros. I think you can guess what the plot is here, its another race, from east (Washington D.C.) to west (Santa Monica) and the winners this time stand to receive 1 million Dollars. Unfortunately the D.C. chief of police (Peter Boyle) manages to arrest all of the drivers prior to game time so a whole bunch of new drivers must be found. One by one each sponsor clambers to find a new driver any way they can, no matter who they are. In the starting grid this time we have Charlie (John Candy), who has been tricked and bullied into driving for his so called best friend from school Gus (Eugene Levy). Charlie is a parking valet and brilliant driver, hence Gus wanting him for the race. Along for the ride is Tiffany, Gus's love interest, for some reason, mainly because she is eye candy. They use a BMW. Matt Frewer plays Englishman Alec who is in debt to loan sharks. They send a hitman to whack him (Joe Flaherty), but Alec persuades Vic to ride in the race with him in order to pay back the money he owes. Vic may have other ideas though. They drive a Jag XJS. The two sexy ladies for this movie aren't quite as sexy as the previous two but hey, you gotta have the sexy ladies in a sexy car, its obligatory. Here they manage to persuade a Ferrari owner to use his Spyder. The duo are MIT grads and electronics/gadgets experts, so they use their brains and electronic gizmos to assist them in gaining the upper hand. This is the easy bit of tame progression for the movie (and 80's), having the sexy females actually going against the norm and being intelligent and skillful characters instead of just skimpily dressed sluts. Tim Matheson is a TV reporter who gets caught up in the race in his van, so he decides to race. The driver of the red Lambo from the intro sequence (John Schneider of 'The Dukes of Hazzard') gets arrested with all the other original drivers, its left in the hands of an Italian porter. An ice cool dude called Flash steps up outta nowhere and takes control to drive it, he's an ex-cop and wants the money for his own unknown reasons. Flash is a super cool, shades wearing driver, where as the Italian is a trembling nervous wreck. Lastly Nelson and Randolph Sloane are two millionaires who spend their whole time trying to cheat their way to the finish, mainly by catching a plane to the finish line. They drive a Bentley Corniche. Jamie Farr makes a cameo as the Sheik from the first two movies but he doesn't race. As you can imagine much of the run time is taken up with the predictable scenarios of the various characters getting into all sorts of close calls. There are some nice moments of car porn but nowhere near as much as the previous two movies, this time an emphasis has been put on making the few set pieces bigger. Hence the race from downtown Washington D.C. which is a highlight admittedly, the race into Santa Monica, and the use of a large aircraft. In between all that there are various small cameos of course and the usual tomfoolery and slapstick routines. One such sequence sees Candy pretty much redoing (homaging?) a famous scene from his classic movie 'Planes, Trains and Automobiles'. Another sees a learner driver being taught by a racist instructor who bullies the learner into overtaking any foreign car, whilst he verbally abuses the driver as they pass. Definitely another highlight as its actually very amusing to see this guys reaction to a Volvo and Alfa Romeo. All things considering there aren't many, if any, car wrecks in this movie, it seems they were too scared to possibly damage anything, or maybe the budget wasn't high enough. The movie takes an age to get going and an age to actually finish and once the race is done it carries on with boring fluff. Its not a particularly funny film, or exciting film, alas we've kinda seen it all before now and this feels very much like beating a dead horse. Nonetheless it is fun at times, the cars are great as always (as long as you like cars) and the range of character actors on display is reasonable.

I'm not a huge fan of Cannonball Run. In a recent bout of nostalgia I decided to give the original a watch and was surprised at how unfunny it actually was. So I then gave the "Canadian Cannonball Run" a go and was unsurprised at how unfunny it was. But the odd thing is, though I don't find either comedy that funny, yet I still don't dislike them. With both films it's fun to see the various celebrities poke fun at themselves and generally act like goofballs. You may not laugh, but they seem harmless enough in the most uncritical sense.

Yawn. Not to much hilarious comedy about the Cannonball Run cross-country road race.