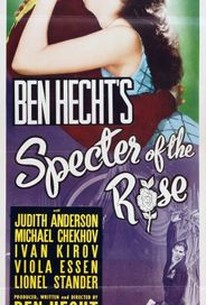 Specter of the Rose Photos

Writer/director Ben Hecht brings "art" to the artless environs of Republic Pictures in the one-of-a-kind melodrama Spectre of the Rose. The film is set in the rarefied world of the Ballet, featuring a curious blend of ballet artists and veteran Hollywood character actors. Ivan Kirov plays Andre Sanine, a dancer who goes insane every time he hears the music for "Spectre de la Rose". Ballerina Haidi (Violet Kessen), convinced that she can cure Andre of his mental aberration, marries him, despite rumors that he has murdered his first wife. All goes well until Andre is once more compelled to perform "Spectre de la Rose"?and then??Ivan Kirov and Violet Kessen are far more accomplished as dancers than as actors, though Kirov is slightly better than his costar. More at home in the histrionics deparment are Judith Anderson as a patroness of the arts, Michael Chekhov as an apoplectic dance impresario, and Lionel Stander as a Greenwich village poet--all quite adept at mouthing Ben Hecht's eloquent witticisms, of which there are dozens. Spectre of the Rose clearly wasn't designed to please everyone; lovers of the ballet and Hecht aficionados will probably best appreciate the film.

Celene Radding
as Dancer
View All

Critic Reviews for Specter of the Rose

Cynical serio-comic ballet melodrama that distinguishes itself by its brilliant dialogue.

Audience Reviews for Specter of the Rose

Well it's different that for sure. A psychological drama set within a small dance troupe it has the advantage of some top grade talent, Judith Anderson and Michael Chekhov for starters, for such a low budget enterprise. Some fine dancing.

Specter of the Rose Quotes