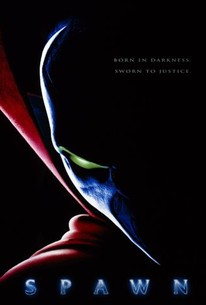 This thriller tells the story of the burnt, scarred, Hellspawn, who keeps performing heroic deeds despite efforts of his demon guide and unattainable temptation to return to his former life.

The film gives you the pleasurably junky sensation of living inside an apocalyptic videogame.

A moodily malevolent, anything-goes revenge fantasy that relies more upon special visual and digitally animated effects for its intended appeal than any comics-derived sci-fier to date.

This hopelessly redundant action gross-out aspires to a form of hip vacuousness -- and may achieve it.

Dippé, an old SFX hand, needs to think about how to tell a story.

Ends up feeling like every other mid-budget comic book movie from the second half of the 1990s, and that was a uniquely dispiriting moment for such things.

Has aged about as well as a banana in the sweltering sun...

As a movie, 'Spawn' can't make up its mind what it wants to be any more than its protagonist knows who he is or what he wants to be.

What it doesn't have is much of a plot.

It's simply a parade of toys and tricks, without a jot of playfulness, knowing humour or campery to endear itself.

Ah Spawn, we all know and love this McFarlane creation don't we. The ex-assassin back from the dead as a demonic hellspawn (from hell) armed to the teeth with weapons and with a living suit that is able to metamorphosis into virtually anything that is required at any given moment...handy. His world is dangerous, dark, grimy, violent, savage, chaotic, vicious and bloodthirsty. He has battled thugs, drug dealers, pedophiles, murderers, the KKK and various creatures from the bowels of hell. If there is any comicbook character that is definitely not for young kids then this is it. Could this comicbook character be anymore badass? the material screams out for a solid ultra violent adult movie adaptation. How could anyone even consider the notion of making a PG-13 out of this graphic splatter fest! ahahahahahahahahahahahahahaha!..bahaha!..haha...hehe...ahem...oh. I quite liked this despite many problems with the movie. Unfortunately this characters outing has aged badly showing some horrendous early CGI effects which will shock you. The visuals are generally decent at times, like the comic its very dark, gothic and grim, but its also very obviously filmed on sets and looks a bit fake. Sure the cold night rain comes down in sheets whilst the mist swirls as Spawn leaps around in his fantastic looking living suit...but you need more than that. The other fantasy based creatures are also well created, Clown especially...very dark, humorous and quite chilling. Leguizamo played him brilliantly swinging from reasonably placid too nasty, vicious and perverted in the bat of an eyelid. Best thing about the film easily, kudos. The Violator is also pretty cool looking in a life size model form yet like a lot of the film the CGI version is pretty lame and ruins it. CGI is a problem with this film as its drenched in it, almost everything is CGI and frankly not much is any good. Jesus Christ even the opening credits are rendered in hokey-ass looking CGI! you can tell back in 97 CGI was the new toy. On the whole the CGI ranges from excellent on Spawns cape, to poor videogame type visuals on most other things. Hell being the worst with a terrible looking Malebolgia and very plain unexciting looking backdrops, it looks like a student created it at home. The whole thing is very amateurish looking these days it really is, heck even back in the day it didn't come across that well. What's laughable if you look closely is all the legions of Hellspawns are clearly on some kind of animated loop as they all do the same action in the background! Its so obviously the same actor replicated a gazillion times, seriously poor. The best CGI is probably the work done on Spawn's mask, apart from his cape that is. The small sequences where we see his living suit/mask slide and form over his burnt face is still pretty slick even to this day. Sure his eyes look a bit too big and green but on the whole his mask does look the business. The fact its wet really gives it a living vibe, as though its pulsating, its one of things that does work in this movie. The acting is hammy with a slight serious edge, but in general its very cheesy. Sheen chews up the scenery and seems to enjoy himself whilst Jai White seems to be going for broke possibly after more comicbook roles. Clearly not expecting much here but this is suppose to be a dark violent franchise, lets try and be somewhat realistic and less camp huh. This film yearns to be harder and more violent (like the comic, what a waste), it is dark brooding and Crow-like for sure but its so watered down its quite painful. Despite that there is this uneasy feeling throughout where you're not too sure which way the film wants to go. Is it really for a wider audience? is it maybe more for adults? certain scenes seem quite risky and close to the bone but then at the same time its all so docile with no real visible violence or blood, realistic or otherwise. It gives the film an unbalanced feel because its lost somewhere in the middle which will leave both sides of the equation not enjoying the film. Like other similar comicbook franchises they must decide which way they wanna take it, its gotta be for kids or not, simple as that. Despite that it does have a certain charm which appeals to me, its dark Batman-esque world with hellish creatures and brooding anti heroes still manages to be enjoyable. Spawn being a very likeable character, Wynn is also suitably creepy and Bishop is changed to a female for some reason but pretty hot with some nice gun/blade action. Add some relatively decent action sequences which are kinda fun in a tame kinda way and you can almost get some enjoyment outta this. At least there's a solid thumping soundtrack to be had. I still wonder what could of been, what it could of achieved had it been made for adults as it should of been. Visually its pleasing if you like this kind of thing (in general), there is just enough comicbook sleaze here to get your teeth into and it still beats 'Ghost Rider' any day of the week.

Mark A.Z. Dippe goes down the dark path with Spawn.

This 90 film isn't without its share of flaws, as some of the plot details are vague. There are pieces that could do with a little more elaboration; however, there is enough detail to make sense of the story and follow. The film has a dark style to it, which leaves the film more gloomy in nature, but this is how it should be.

The usage of effects and green screen is obvious, although it is satisfactory for its time. The action also has its moments thanks to the powers of Spawn.

Michael Jai White may be Spawn, but this film belongs to John Leguizamo. He ends up as the perfect fit for the Violator and his consistent use of "black" humor. Martin Sheen steps in with a solid performance. Theresa Randle is too monotone until the very end.

Spawn does have room for improvement, but for what it is, it is a solid 90 minute watch.

I thought Spawn was such a cool film as a kid, but remembering it now and having to review it, it is very flawed.....it has poor acting and a poor plot. One thing that is still cool to this day is when Spawn drops in the ballroom at the end and starts fighting......bad ass.