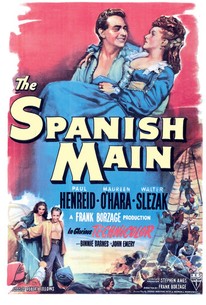 RKO Radio's first film in the three-color Technicolor process was the standard-issue swashbuckler The Spanish Main. Paul Henried is his usual stoic self as Laurent Van Horn, a Dutch sea captain shipwrecked on the coast of Cartagena, a Spanish-held island. Sentenced to be hanged, Van Horn and his crew escape from jail and take up piracy as revenge against Spain. Soon afterward, they capture a ship carrying Francisca (Maureen O'Hara), the fiance of Cartagena's corrupt governor Don Alvarado (Walter Slezak). Van Horn vengefully forces Francisca to marry him instead, which causes dissension at the Pirate colony of Tortuga. Naturally, Van Horn and Francisca eventually fall in love with each other, but the bad guys must be vanquished before a happy ending can be realized. Binnie Barnes steals the show as feisty female buccaneer Anne Bonney (who in real life looked less like Barnes and more like Walter Slezak!) The script is a cynical melange of pirate-movie cliches and the performances are generally routine, but The Spanish Main pleased the crowd in 1945, posting a profit of nearly $1.5 million and encouraging future Technicolor adventure films from RKO.

Bob O'Connor
as Master at Arms

Don Avalier
as Pirate
View All

Critic Reviews for The Spanish Main

A classic (sub) genre that has betrayals, fight sequences, beloved secondary characters, some comic detail and an impeccable rhythm. [Full review in Spanish]

It hardly seems the work of Frank Borzage.

A conventional pirate story that's given a colorful treatment under Frank Borzage's helmsmanship.

Audience Reviews for The Spanish Main

There are no featured audience reviews yet. Click the link below to see what others say about The Spanish Main!