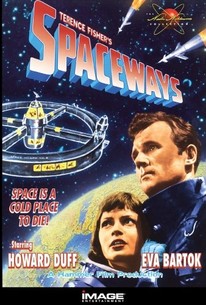 Adapted from the popular British radio serial of the same name, Spaceways is a dual-market science fiction effort, co-financed by England's Hammer Films and America's Lippert Studios. American rocket scientist Stephen Mitchell (Howard Duff) works day and night to realize his goal of sending the first man-made satellite into outer space. Meanwhile, Mitchell's wife Vanessa (Cecile Chevreau) is carrying on an affair with fellow-scientist Crenshaw (Andrew Osborn). Not long after Mitchell discovers this, the satellite is launched ahead of schedule. Since both his wife and her lover have disappeared at the same time, Mitchell is accused of murdering the pair and stuffing their corpses into the spaceship. To prove his innocence, Mitchell volunteers to go up in a second ship with mathematician Lisa (Eva Bartok) to conduct a search of the satellite. ~ Hal Erickson, Rovi

Although the film has a somewhat forced ending... it is a highly enjoyable film. [Full Review in Spanish]

There are no featured reviews for Spaceways at this time.