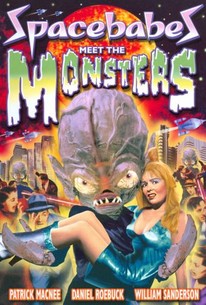 Patrick Macnee, Daniel Roebuck, and William Sanderson headline this kitschy sci-fi yarn about a trip through time gone horribly awry. A scheming professor is convinced that he can save mankind by traveling into the future, but in order to accomplish his benevolent mission he'll need some serious help. After convincing a group of down-and-out astronauts to take the trip, the professor and his trusty gorilla sidekick prepare to launch themselves into the future. But the Earth of the future bears little resemblance to the planet of the present, because in the future mankind has fallen victim to a cosmic plague, and a beautiful race of space babes reign with brutal authority. Add a horrible monster and an army of mutants into the mix, and it begins to appear that the professor's noble mission was doomed to failure all along.

There are no critic reviews yet for Spacebabes Meet the Monsters. Keep checking Rotten Tomatoes for updates!

There are no featured audience reviews yet. Click the link below to see what others say about Spacebabes Meet the Monsters!