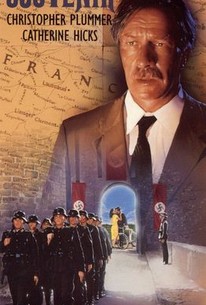 Based on the novel The Pork Butcher by David Hughes, this melodrama was directed by literary adaptation specialist Geoffrey Reeve, producer of The Shooting Party (1984), Half Moon Street (1986), and The Whistle Blower (1987). Christopher Plummer stars as Ernst Kestner, a German Army veteran who relocated to New York, where he has lived for 43 years, since the end of WWII. Upon the death of his wife and the takeover of his deli business by a chain store, Ernst embarks on a nostalgic journey to France, the site of a 1944 love affair he had with a beautiful young woman in the small, occupied town of Lascaud. In Paris, Ernst reunites with his estranged daughter Tina (Catherine Hicks), who is having marital problems and agrees to accompany her father on his sentimental journey. In Lascaud, however, Ernst discovers both the fate of his long-lost love and horrifying evidence of his complicity in a wartime atrocity he never knew occurred.

There are no critic reviews yet for Souvenir. Keep checking Rotten Tomatoes for updates!

There are no featured reviews for Souvenir at this time.