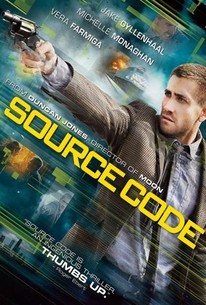 When decorated soldier Captain Colter Stevens (Jake Gyllenhaal) wakes up in the body of an unknown man, he discovers he's part of a mission to find the bomber of a Chicago commuter train. In an assignment unlike any he's ever known, he learns he's part of a government experiment called the Source Code, a program that enables him to cross over into another man's identity in the last 8 minutes of his life. With a second, much larger target threatening to kill millions in downtown Chicago, Colter re-lives the incident over and over again, gathering clues each time, until he can solve the mystery of who is behind the bombs and prevent the next attack. -- (C) Summit

Albert Kwan
as Soda Can Guy

Ultimately, Source Code makes good on its Hitchcockian opening sequence -- it may pale in comparison to the master, but it's a fun, puzzle-filled ride, with excellent pacing and a mounting uneasiness that recalls the best episodes of The Twilight Zone.

Source Code is a sci-fi thriller that simply shouldn't work as well as it does.

It's this emotional arc underlying the ticking-time-bomb plot that keeps the movie from succumbing to its flaws.

A thoroughly original, imaginative and fast-flying tale in which the Groundhog Day aspects are secondary to a story of service, honor and dedication.

Holes in logic get swept aside by the brisk pace and stimulating tale.

A casually brainy and surprisingly thoughtful blockbuster... that is ultimately as much about saving the day as seizing it.

Source Code is a really strong film. It is a significantly more "pop" film than Moon was and will probably reach a wider audience.

As he did with Moon, [Duncan] Jones, together with screenwriter [Ben] Ripley, tackle concepts few dare to imagine let alone address.

One of the most exhilarating and satisfying films I've seen.

[A] bold - and often brilliant - piece of action filmmaking, which artfully blends notions of identity and fate with blockbuster effects and some snappy editing.

It's just a dumb Hollywood film.

The cheesiness at times was a negative but I enjoyed the simple effective narrative, and the cast delivers nicely.

Source Code is what the film Inception should've been like. Rather than being basically a different version of the matrix like Inception, this film is actually very entertaining, the plot is fantastic, the action is good, the the characters are fleshed out and very well developed, Jake Glyenhaal does a fantastic job as the main character and is very likable and throughout the film you just want to know whats happening to him. Also the pace of the film is very good, the film is interesting and is very quick and though having a run time of 105 minutes, it really doesn't feel like it because of how entertaining it is.

In the future not only will we be able to see the film Groundhog Day again, but we'll also be able to live it ... only it'll be the same few minutes, over and over again. Just a little trifle of fun laughing down the dark dark halls of the time travel trope, the dark of the twilight zone. Very good.

An interesting premise put together nicely by Duncan Jones (Moon). Thats two for two on his movies so far. And Jake Gyllenhaal was excellent, made me completely forget about Prince of Persia.