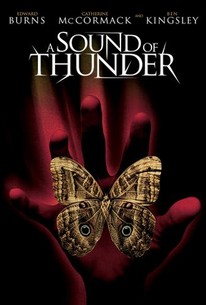 Critics Consensus: Choppy logic and uneven performances are overshadowed by not-so-special effects that makes the suspension of disbelief a nearly impossible task.

Critics Consensus: Choppy logic and uneven performances are overshadowed by not-so-special effects that makes the suspension of disbelief a nearly impossible task.

Critic Consensus: Choppy logic and uneven performances are overshadowed by not-so-special effects that makes the suspension of disbelief a nearly impossible task.

A Sound of Thunder Photos

A seemingly insignificant act may cause the fabric of history to unravel in this sci-fi adventure. Charles Hatton (Ben Kingsley) owns and operates a successful firm known as Time Safari. Thanks to time travel technology developed by Hatton's employee Sonia Rand (Catherine McCormack), Time Safari allows big game hunters to journey back to prehistoric days and shoot living, breathing dinosaurs. Rand picks out the dinosaur in question, who is soon to die, and creates a floating walkway for the hunters, so the impact of their presence will not be felt by the land around them. But on one expedition, things go horribly wrong when a nervous hunter steps off the walkway and crushes a butterfly, a tiny act that proves to have massive consequences over the course of several million years. As the earth's climate and animal life begin to mutate due to this shift in natural history, Time Safari's leading hunting guide, Travis Ryer (Edward Burns), works beside Rand in a desperate attempt to halt the "ripples of time" before modern civilization completely collapses. A Sound of Thunder was based on a classic short story by pioneering science fiction author Ray Bradbury.

Stuart Ong
as Chinese Man No. 1

Vladimir Kulhavy
as Man at Eckles'

Jiri Klenot
as Man at Middleton's
View All

News & Interviews for A Sound of Thunder

View All A Sound of Thunder News

Critic Reviews for A Sound of Thunder

At the risk of making an overly broad and limiting generalization, it's generally wise to make sure an action movie's plot has actually kicked into gear by the time the first hour has elapsed.

So perfect in its awfulness, it makes one seriously consider a theory of unintelligent design.

The movie's most political aspect may be its quaint respect for the basic principles of evolution.

Many video games look more authentic than this.

An exciting, uneven thriller that explores the ripple effect of altering one tiny moment in the distant past.

If movies have personalities, this one has an appealing one, combining scientific inquisitiveness with giddy pleasure in creating tension for viewers.

This film deserves a gold plaque in the plague of summer stink bombs. . .

The film's temporal ineptitude would give Doc Brown a seizure, suggesting that an evolutionary mishap alters some creatures but conveniently leaves our bland heroes -- and Ben Kingsley's silly wig -- completely unchanged.

Based on the Ray Bradbury short story of the same name, this is a colassal disapopintment - unworthy of the memorable source material.

The special effects are on par with a basic film you'd see about a giant squid on the Sci-Fi Channel, and the story is just as boring.

The film is full of rumbling sounds that will make your innards tremble (at least in some theaters). But that's about all it has going for it.

Audience Reviews for A Sound of Thunder

Hilariously bad! Has some of the worst CGI effects I've ever seen and some animations are even repeated as if no one would notice. The people behind this movie obviously ran out of money. It's still watchable in a way though, as you have a good time mocking and laughing at all its sillyness. Do yourself a favour and watch The Butterfly Effect instead, which is based on the same concept, but is far more superior in every single aspect.

Some Rules Should Never Be Broken.

This could have been so much better.

There's a lot of hate directed towards this film and it is mostly understandable. Granted, the effects are, at times, atrocious. The street scenes and cars look like pre-viz treatments. It came as no surprise to find out, that is what they are. The films production company went bankrupt during post-production and so we are left with an unfinished film. The poor effects allows you to focus on the plot, which will go one of two ways. I found it rather engaging with some nice early ideas, before it descended into action. The designs for lizard apes and giant bats were rather impressive to me. For some reason I just like Edward Burns, he isn't the greatest actor in the world but for some reason I always like him. Kingsley has an interesting character, he adds charisma into the businessman that puts money above all else. Others that watch this film may be infuriated and irate with the handling of time travel. I believe in films we must have a suspension of disbelief, but a film still needs to follow it's own rules...Except for time travel movies. To me, time travel is just so complex and theoretical that it is hard to translate well to film, unless you say "Just because..." I wasn't bored, I wasn't annoyed (apart from one moment with a hot wiring scientist) and I even felt a little connected to it. It's the sick, dirty puppy at the pound. You find it cute and endearing, but you don't want to take it home.

A Sound of Thunder Quotes