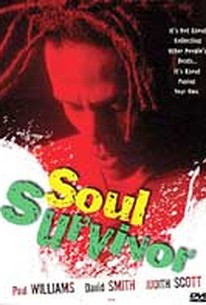 This Canadian drama, set in Toronto's Afro-Caribbean sector, chronicles the plight of a Jamaican-Canadian struggling to survive in an urban environment. Tyrone Taylor is in his in his twenties. He works in a salon, but he doesn't like the work. What he really wants is some easy money and a way to get out. He starts collecting debts for Winston Price, a gangster and the owner of a nearby club. The work is violent and illegal, but Tyrone rationalizes the work and ignores those aspects. He just keeps the money he earns in hopes of getting into a cleaner business. Though his girlfriend and family warn him of the dangers of the life he has chosen, the naive Tyrone continues, foolishly believing he is too careful to get caught. ~ Sandra Brennan, Rovi

There are no critic reviews yet for Soul Survivor. Keep checking Rotten Tomatoes for updates!

There are no featured reviews for Soul Survivor at this time.