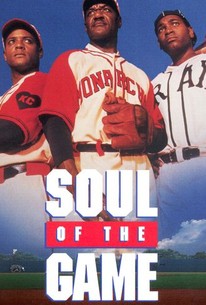 Soul of the Game Photos

The true story of baseball's early days of racial integration is told in this made-for-cable movie. Blair Underwood stars as the young Jackie Robinson, who surprised everyone -- both the white sporting fans and his fellow Negro-league players --- and became the first African-American baseball player to reach the major leagues. Co-star Delroy Lindo, Underwood, and the film itself were all nominated for Image Awards.

Critic Reviews for Soul of the Game

Akin to a bloop single: it's not pretty but it gets the job done, even if only for a little bit.

A great story told in a great way.

Baseball fans will appreciate it far more than non-fans, and it's worth a look for the history despite the awkwardly forced cinematic moments

Audience Reviews for Soul of the Game

There are no featured audience reviews yet. Click the link below to see what others say about Soul of the Game!

Soul of the Game Quotes