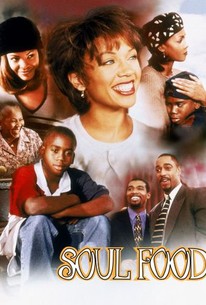 Critics Consensus: Much like the titular cuisine, Soul Food blends a series of savory ingredients to offer warm, generous helpings of nourishment and comfort.

Critics Consensus: Much like the titular cuisine, Soul Food blends a series of savory ingredients to offer warm, generous helpings of nourishment and comfort.

Critic Consensus: Much like the titular cuisine, Soul Food blends a series of savory ingredients to offer warm, generous helpings of nourishment and comfort.

This hit domestic comedy-drama concerned the fortunes of an extended African-American family recalled through the eyes of young narrator Ahmad (Brandon Hammond). Ahmad's world revolves around his grandmother, Big Mama Joseph (Irma P. Hall) and her three daughters: workaholic attorney Teri (Vanessa Williams), newlywed salon owner Bird (Nia Long), and Ahmad's housewife mom, Maxine (Vivica A. Fox). Each sister is in turmoil. Teri has lost patience for her husband Miles (Michael Beach), who wants to quit the law and take up music. Bird doesn't realize that her husband Lem (Mekhi Phifer) is about to be humiliated by her ex-boyfriend (Mel Jackson). And while Maxine's relationship with her husband Kenny (Jeffrey D. Sams) is going well, her relationship with her jealous sister Teri needs fixing. These conflicts boil over at Big Mama's traditional Sunday dinners, where the matriarch plays peacemaker. The ritual faces extinction, however, when Big Mama suffers a stroke -- but Ahmad is waiting in the wings to take her place. Soul Food launched the directing career of Milwaukee, Wisconsin, native George Tillman, Jr., who based the script on his own family experiences. In the summer of 2000, Soul Food was spun off into a cable TV series. ~ Karl Williams, Rovi

Vivica A. Fox
as Maxine

Joan Collaso
as Choir Member No. 1

George Brashear
as Blimp's Henchman No. 1

An overt desire to please often leaves Tillman relying on force-feeding techniques.

Soul Food aims to be a banquet of feelings, but mostly it serves up tripe.

The steaming platters of fried catfish, macaroni and cheese, sweet corn bread, and black-eyed peas that appear early and often in writer-director George Tillman Jr.'s sentimental family drama should be listed in the credits as costars.

Soul Food serves up family melodrama-cum-comedy that's tasty and satisfying, if not particularly profound or original.

Tillman is tremendously skilled at bridging the vast shifts in tone.

A hearty, old fashioned meal of a film.

As warm and funny as it is dramatic and emotionally involving, with fully-fleshed characters brought to life by the strong ensemble acting.

Your appetite may be blunted by the surfeit of syrup.

A messy, good-natured paean to the power of food and family to fix what ails you.

This story is right out of America's collective unconscious.

A glossy and generally praiseworthy melodrama by writer-director George Tillman.

Awesome movie. For the food lovers. ;) This is a touching movie on family issues. One of my favorites.

It's all about family get together, no matter what...I don't care who you are...you have got to enjoy this one. Get this....it is maximum drama.

One of my family's favorite movies. Funny, dramatic, and full of heart. Goes to show that regardless of race, all families go through similar problems, but share a similar love as well.