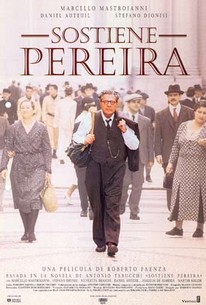 This drama, set in 1938, chronicles a month in the life of the Portuguese journalist Pereira. He is first seen as a lonely, widowed, and overweight editor of the culture page of a second-rate Lisbon newspaper. Earlier in his career, he had been a news reporter. Pereira is fascinated with old literature; he is also obsessed with death. He hires himself an assistant, Monteiro Rossi, to prepare obituaries for old writers before they die. The young man and his girlfriend are both passionate fighters against the dictatorship in Portugal. They, along with a German Jewish woman, help to draw Pereira out of his dusty old books and spark his interest in the current political turmoil of Europe. Eventually they strongly encourage him to use his position to post notice of the impending dangers to the public. At their urging, Pereira is emboldened to publish his translation of an anti-German French short story. Although he sneaks it past the censors, his editor catches it and Pereira is in deep trouble. Meanwhile Rossi leaves his job to join the underground revolutionaries. Pereira keeps sending money to Rossi's girl, but he doesn't become totally committed to the cause until he meets up with the philosophical cardiologist who narrates the tale. ~ Sandra Brennan, Rovi

Critic Reviews for Sostiene Pereira (According to Pereira) (Pereira Declares)

There are no critic reviews yet for Sostiene Pereira (According to Pereira) (Pereira Declares). Keep checking Rotten Tomatoes for updates!

There are no featured reviews for Sostiene Pereira (According to Pereira) (Pereira Declares) at this time.