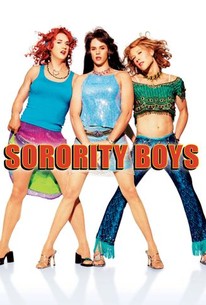 Critics Consensus: A sloppy fratboy movie, Sorority Boys offers up a parade of gross-out gags and sex jokes, while insulting and ogling women.

Critics Consensus: A sloppy fratboy movie, Sorority Boys offers up a parade of gross-out gags and sex jokes, while insulting and ogling women.

Critic Consensus: A sloppy fratboy movie, Sorority Boys offers up a parade of gross-out gags and sex jokes, while insulting and ogling women.

The time-honored "men in drag" concept gets a teen sex comedy makeover with this farce from director Wallace Wolodarsky. Dave (Barry Watson), Adam (Michael Rosenbaum), and Doofer (Harland Williams) are a trio of broke playboy misogynists who are accused of embezzlement by their frat brothers and kicked out. The friends quickly find themselves with only one option if they wish to remain on campus rent-free and nab the real culprits: the sorority known as Delta Omicron Gamma (D.O.G.), an institution widely known for its members' deficiency of physical beauty. After undergoing radical transformations thanks to wigs, makeup, and some serious depilatory efforts, the boys are soon passing themselves off as Daisy, Adena, and Roberta. It's not long before their past mistreatment of women has come back to haunt them, while Dave falls in love with Leah (Melissa Sagemiller), the head of the sorority, forcing him to consider when and where to confess the truth. In the meantime, the boys draw closer to learning the identity of the real thieves. Sorority Boys (2002) co-stars Heather Matarazzo.

Stephen Furst
as The Alum

Johnny A. Sanchez
as The Littlest Alum

Merely (and literally) tosses around sex toys and offers half-hearted paeans to empowerment that are repeatedly undercut by the brutality of the jokes, most at women's expense.

Whenever it realizes it's venturing into truly risky territory, it bounces back to somewhere safer, like the terra firma of conventional boy-oriented teen-raunch comedy.

After being subjected to this painful movie ... you'll be rendered speechless. Not by any demonstrable good humor, but because of light brain damage.

This comic gem is as delightful as it is derivative.

To say this was done better in Wilder's Some Like It Hot is like saying the sun rises in the east.

Best left to the easily pleased.

Sorority Boys is no great cinematic work of art.

Tends to sometimes rely too much on toilet humor and sex jokes to force a laugh, but sometimes just made me cringe.

If you're hard up for raunchy college humor, this is your ticket right here.

Most bad movies have at least some redeeming features. Sorority Boys isn't most movies

Of the genre I thought this was pretty good; I never expect much from late night, and as a result I'm rarely disappointed. This one was well acted, and had many laugh out loud scenes. The plot was predictable, but pleasantly so...and at the end of it all you are left with the feeling that love will conquer all.

probably one of the worst movies ever made.

I have no idea why I like this movie as much as I do, it is terrible but awesome at the same time. Probably the fact that I think Barry Watson is hot has to do a lot with it.

Cross dressing is not always funny.