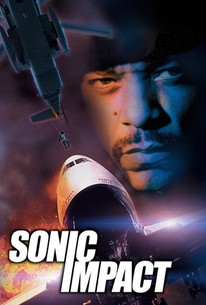 Terror flies at 30,000 feet in this tense action thriller. Jeremy Barrett (Michael Harris) is a brilliant but unbalanced criminal genius who, while being transported to a penal facility aboard a commercial airliner, breaks free and takes control of the jet, holding the passengers hostage, blowing a hole in the cockpit, and threatening to crash the plane into a heavily populated area of a major city if his demands aren't met. Barrett may have met his match, however, in Nick Halton (James Russo), a former Navy SEAL and current FBI agent who is willing to take the potentially deadly assignment of being dropped by helicopter into the runaway jet to disarm Barrett and bring the jet safely to the ground. Sonic Impact also features Ice-T, Mel Harris, and Brittany Daniel.

Hanks & Son Will Do "Great" Together

There are no critic reviews yet for Sonic Impact. Keep checking Rotten Tomatoes for updates!

There are no featured audience reviews yet. Click the link below to see what others say about Sonic Impact!