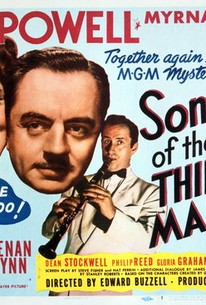 Song of the Thin Man Photos

This last entry in MGM's "Thin Man" series isn't the best of the batch, but is a lot better than most other comedy-mysteries of the period. Older but no less glamorous and sophisticated, Nick and Nora Charles (William Powell and Myrna Loy) try to solve a murder on a gambling ship, thereby plunging into the rarefied world of Manhattan jazz nightclubs. Since this is alien territory for Nick and Nora, they must rely upon hep-talking clarinetist Clinker Krause (Keenan Wynn) to act as their guide. As the case progresses, several subplots converge, chief among them the furtive romance between socialite Janet Thayar (Jayne Meadows) and gambler Phil Brant (Bruce Cowling). When the Charleses get too close to the solution, it spells trouble for their 11-year-old son Nick Jr. (Dean Stockwell). The film's biggest surprise is that is that the actor who usually plays the "hidden killer" in films of this nature isn't the culprit this time around. In addition to its many other virtues, Song of the Thin Man offers one of the few credited screen appearances by "queen of the extras" Bess Flowers, here playing the wife of suspect Ralph Morgan.

Ralph Morgan
as David I. Thayar

Tom Trout
as Lewie the Shiv

Henry Nemo
as The Neem

Jerry Fragnol
as Young Nick at Age 5
View All

News & Interviews for Song of the Thin Man

View All Song of the Thin Man News

Critic Reviews for Song of the Thin Man

the film flows less smoothly than its predecessors

Although the ending of Song of the Thin Man leaves a lot to be desired, including the compulsory confession, everything leading up to it works pretty well.

The great chemistry between Powell and Loy is still there and their charm carries things a long way.

One of series' best.

The last of a six-film series was running out of gas, but it's still good, clean fun.

Last, but not quite the least of the series.

Audience Reviews for Song of the Thin Man

I like the Thin Man series, but this one is more average than usual, and by now you know how Powell will solve the mystery anyway.

A little bit better than the previous "The Thin Man Goes Home", "The Song of the Thin Man" centers around a group of jive-talking, hepcat jazz musicians (and thankfully, this time there's less of the dog). The focus is more on the storyline than the last movie, and with less of a focus on comedy, but it's still awfully convoluted. An alcoholic musician is given the sack by the bandleader who turns up dead shortly thereafter. Said bandleader also had a heavy gambling debt and believed his life was in danger from the loan sharks. Nick and Nora are brought in to solve the case, and the usual tom-foolery ensues. While the film has its share of decent gags (personally, I found the swing band very amusing), it's still along way distant from the original film.

The Batman and Robin of the Thin Man series. Powell and Loy kind of look like they don't want to be there, Nicky jr's (played by Dean Stockwell) scenes ensure the shark gets jumped and the whole jazz band gimmick spell doom for Nick and Nora. The spanking scene was really stupid and the story has none of the charm of the previous Thin Man movies--not to mention an ending that felt a bit rushed. Still, Song of the Thin Man isn't all bad--it's got a few funny lines and film noir vixens Gloria Grahame and Marie Windsor make appearances. If you've seen all the other Thin Man movies you may as well finish the series off, but be advised--Song of the Thin Man serves as proof that the series went on too long.

Song of the Thin Man Quotes