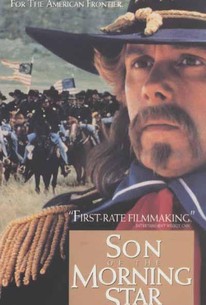 This second half of the sweeping TV adaptation of Evan S. O'Connell's novel (see entry 129099 for details on Part One) stars Gary Cole as George Armstrong Custer, leader of the 7th Cavalry of the Great Plains in the early 1870s. Custer's efforts to maintain peace with the surrounding Native Americans are doomed to failure due to his own arrogance and miscalculations. The Indians reluctantly marshal themselves for war when the white man's lust for gold results in broken treaties and ravaged lands. Part Two culminates in a spectacular (and fairly accurate) recreation of the Battle of the Little Big Horn, pitting Custer against another headstrong tactician, Chief Crazy Horse (Rodney Grant). As in Part One, Part Two of Son of the Morning Star is narrated by Buffy St. Marie, attempting--with moderate success--an "old lady" characterization. Parts one and two were later merged into a single 186-minute TV movie. Side Note: Kevin Costner was offered the role of Custer in Son of the Morning Star, but turned it down to concentrate on his own Native American epic--a little diversion called Dance With Wolves (which also featured Rodney Grant). ~ Hal Erickson, Rovi

Critic Reviews for Son of the Morning Star

There are no critic reviews yet for Son of the Morning Star. Keep checking Rotten Tomatoes for updates!

Audience Reviews for Son of the Morning Star

There are no featured audience reviews yet. Click the link below to see what others say about Son of the Morning Star!

Son of the Morning Star Quotes